Please Cindy, say the whole name each time.
I'm called Tim. I've been playing Dink since it came out, when I was a young, dumb kid.

This is a pretty short demo. It took me twenty minutes, but that's only because I got confused by some unintuitive puzzle design.

Like "Legend of the Dink II," this starts right where the last one left off, with Dink and Martridge surrounded by goblins. I like this approach, and I wonder why it hasn't been seen more often in DMOD series. Dink even starts with the light sword and hellfire spell that he got in the previous installment.

Dink escapes through a hidden passage while Marty stays behind to hold off the goblins. Martridge tells Dink that Seth has made Stonebrook his base of operations, although I wonder when he had the chance to learn this. 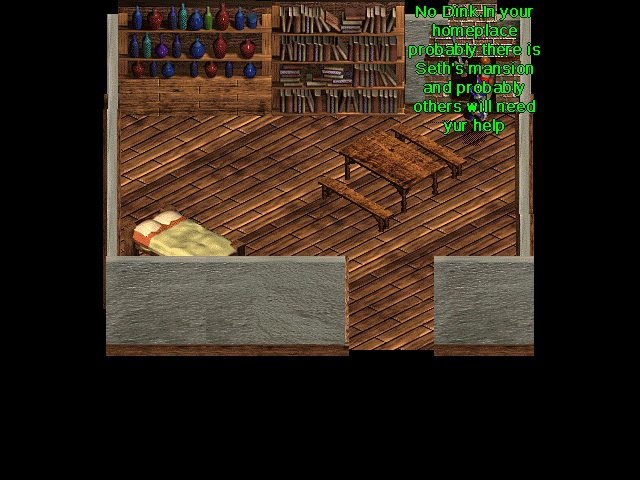 Probably! I just happen to be exactly right about this!

Dink soon makes his way to "Port Village," where he must buy a boat in order to travel to Stonebrook and defeat Seth once and for all. It turns out that most of the characters from the original game have escaped to this town, including Mr. SmileStein, Ethel and Quackers, Nadine and Mary, and Dink's aunt Maria. He asks her what happened to Jack, which seems odd. I mean, you don't have to kill him, but I was under the impression that most players did. 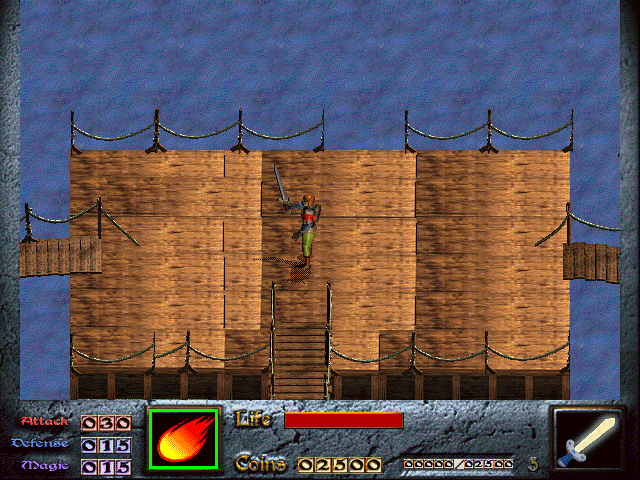 Although it looks a little rough, I like the port in Port Village. It looks better than I would have expected for being cobbled together from graphics intended for something else. Unfortunately, Dink clips under the bridges as he walks over them.

Dink's "quest" in this demo consists of retrieving a few things for some guy in order to make enough money to buy a boat. The first thing he wants is for Dink to find his lost wallet. He has no idea where it is. It seems reasonable to go looking for it, right? Nope, you have to talk to another NPC first, or the wallet will never appear. This obviously makes no sense - if he's telling you he lost his wallet, surely the wallet should already be where he left it. Every step in this DMOD ends up involving going around and talking to everybody, because there's no way to know whom the DMOD wants you to talk to next. 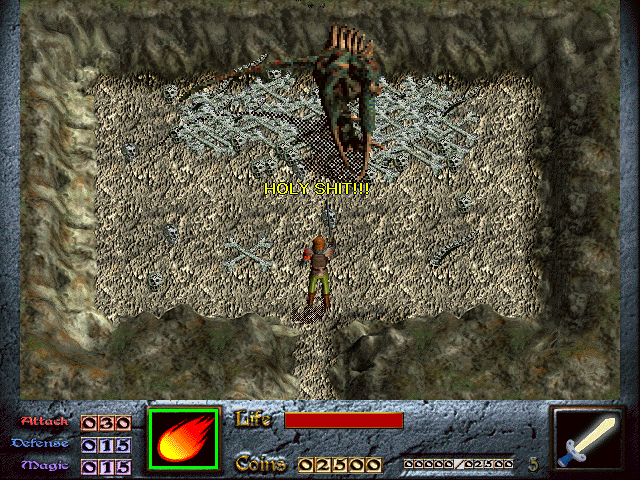 The wallet quest culminates in this battle with a big slayer. It's not too tough.

The English in this game is kind of a mess. It hasn't been good in any of the "Legend of the Dink" DMODs, and of course I've been allowing for the fact that it isn't the author's first language, but early on, this installment seems to be trying to tell a serious story, and it's hard to take it seriously. Of course, it goes on to abandon all pretense of seriousness. The last thing the guy wants is some bonca dung, and Dink has a lot of lines about needing poop or s***. He has to "scare the poop out of" Quackers, and ends up yelling things at the duck that make Rand's threat to the Spammer King in "Rand's Quest for Axe" look cute and cuddly by comparison. It's, um, vulgar. I think it was supposed to be funny, but I wasn't laughing.

There are some hardness and depth dot errors in this one, too. One hardness error lets you walk straight into a treeline, and Dink tends to clip behind doorways. As for the decoration, while the screens look nice enough, solid objects have been stamped excessively to the point where navigating is a real pain. 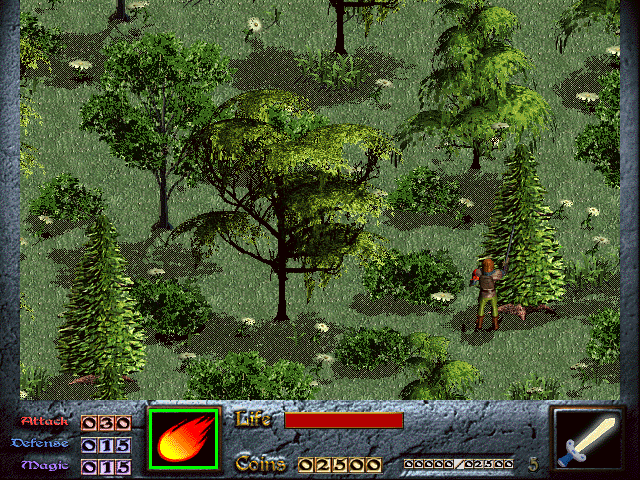 This seems to have been an ambitious project. The ending sets up an epic-sounding final crusade against Seth. The escape menu has been rewritten, including a new "Help" menu (I told you I notice these things). It may be just as well that it wasn't finished. Having to go talk to everybody for each step in a puzzle was mildly annoying in this short demo, but it would have been torture in a big, long DMOD.

Apparently I haven't covered all of the Weird DMOD Contest entries yet - just all of the eligible ones. According to the description:

I made this D-MOD for entry in the Weird D-MOD Contest. It is really weird, since I missed the entry deadline by several years. But, I wasn't a "Dinker" during the time of the contest. I should get special consideration.

You've got to admit, it's pretty weird to submit an entry to a contest that ended more than three years ago.

"Marco Polo" stars a pair of sisters known as the "Glitz twins," who appeared in "Picnic Perils" and were mentioned in "Attack of the Mutant Veggies." Dink is always trying to get with them and failing. Their names are Chastity and Virginia, and I'm pretty sure that's supposed to be ironic.

In case you've never heard of the game of Marco Polo, I'll explain it. One player wears a blindfold and has to find the other(s) by following the sound of their voice. When the blindfolded player calls out, "Marco!" the other player must answer, "Polo!" That's all there is to it. 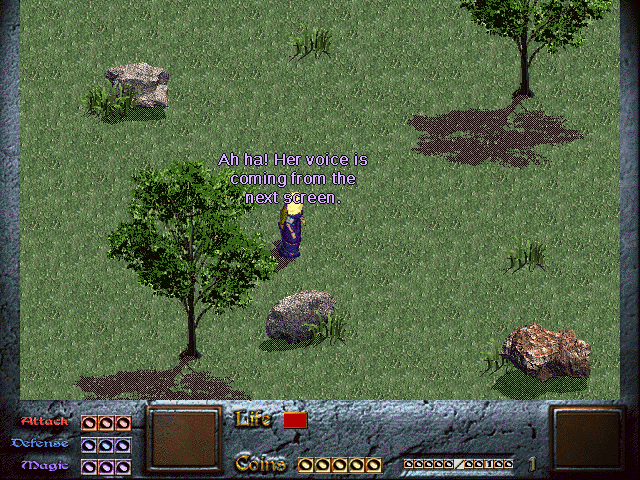 Virginia gets the gist of it.

As Virginia, you have to find Chastity. You press the Z key to shout, "Marco!" and figure out where to go by where the text shows up on the screen. Since you're wearing a bag over your head, your surroundings are dark. You do have a vague idea of where objects are, indicated by dark rectangles, but you're still going to be walking around bumping into things. 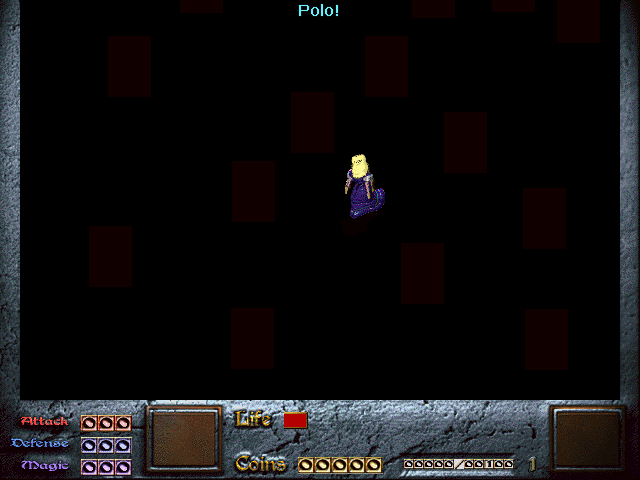 It's abstract, but it's not a bad way to simulate stumbling around blindly.

When you find Chastity, the girls give up on the game to go get loaded at the pub. It can't take more than a couple of minutes from start to finish. The only other thing I can comment on is the music, which includes songs like the Winnie the Pooh theme and "It's a Small World" to set a silly, childish mood. This DMOD is pretty good at accomplishing the very simple thing it tries to do, though. And RadFrog gets extra points for Virginia not turning into Dink when you push, which happens a lot because you can't see where you're going.

The setup for this one is kind of cool. The "Tears of the Devil" are literal tears cried by the Devil, which turned into gems which hold great power. If either a good person or an evil one gets one of these gems, it will drag the moral balance of the world toward them, which will be a disaster in either case:

This is mumbo-jumbo with no application to the real world, of course, but I like it anyway. It's evocative, especially the associations with the sun and moon. I'm also impressed that the author commits to the idea of balance. Most stories that talk about balance nonsensically treat "balance" as good wiping out evil. I mean, technically Anakin did bring balance to the force - two Jedi, two Sith, right? Balanced.

In "Tears of the Devil," there are two ways to prevent disaster - either kill the person who found the gem, or kill the devil. Of course, only the latter really solves the problem permanently.

Good King Albert has found one of the Devil's Tears. You, his knight Chauncy, must solve the problem. I'm not sure how Chauncy figures out exactly what the problem is - the King doesn't know, and nobody really tells him. I guess he watched the intro. As soon as you find the other Devil's Tear, which is lying in plain sight not far from the castle, you can choose to kill Albert or the Devil. The former option leads to a bad ending, the latter to a final area. I guess the idea is that you grind in the initial area until you feel ready, then go take on the Devil, but there's not much to do in the initial area. Not in easy mode, at least. 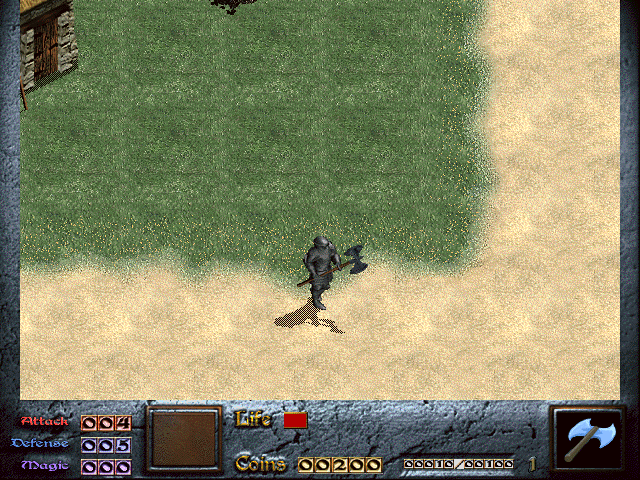 All of the maps in this DMOD are very plain. Chauncy, unfortunately, turns into Dink when pushing or dying.

There are four difficulty modes in "Tears of the Devil:" easy, medium, hard and !nsane. On easy and medium, you can stroll right up to the Devil, but on harder difficulties, you're interrupted by midbosses on the way.

I played on easy. On this difficulty, the Devil wasn't a big problem, although she was very annoying. Yes, I said 'she' - for some reason, the Devil takes the form of a girl. Anyway, in lower difficulties the Devil doesn't do anything but walk around slowly, but she has 1000 hit points. I chopped away at her for over ten minutes before she went down. No, that isn't hyperbole. It sucked. It just cuts straight to the (very short) credits when you win. 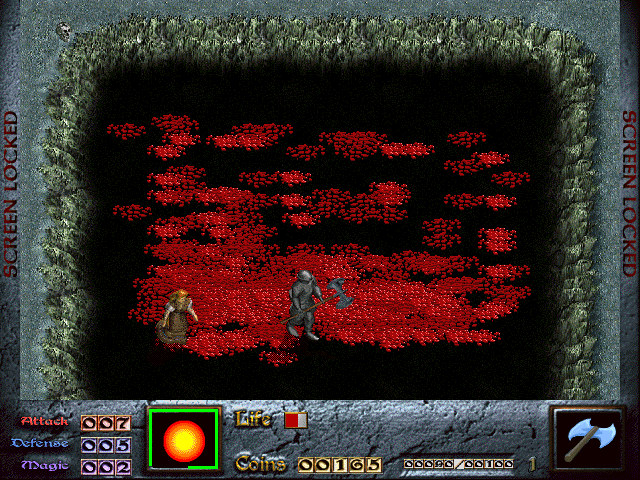 To amuse myself, I decided to see how much of the abyss I could coat in blood.

The author seems to have been very proud of !nsane mode. It's where most of the content is. There's a "bonus cave" on that mode that actually makes up most of the DMOD's map, and several extra bosses. This difficulty isn't even remotely fair, but that isn't exactly a complaint. I mean, the game warns you about that. 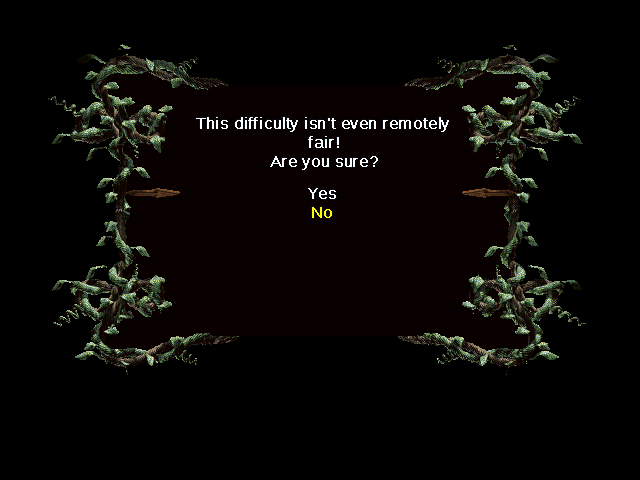 Still, I can't imagine anybody having the patience to play through !nsane mode, which features such delights as a boss with 30,000 hit points, itself part of a long sequence of bosses that you have to fight without a break. Yeah, no thanks.

There isn't really a story or quest here, just a simple map with a bunch of pillbugs and boncas, both of which have been nicely recolored by the author. Every time you kill a monster, Dink announces the number of monsters he's killed so far. 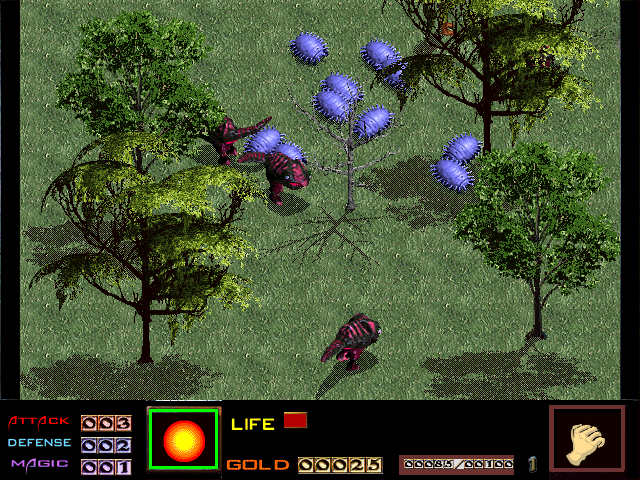 The boncas look neat. I actually used this blue pillbug sprite in "Malachi the Jerk."

There are a few "secret" screens that are quite easy to find. One gives you some stat potions and a gold heart. The other nets you some herb boots (oddly, they use the light sword inventory graphic) and Dan "O B" Walma's Dinksaber. It looks like it's supposed to give you a throwing axe too, but it doesn't. The third secret screen contains, surprisingly enough, an ending of sorts. If you kill at least 44 enemies and talk to the Milder-looking person on that screen, he'll congratulate you, encourage you to write to the author and demand a full version, and stroll off through solid rocks. What fun.

There are a couple of problems. Some screens are tiled quite poorly, and the author's decision to make the monsters-killed variable "&s" messes up the default savebot script. 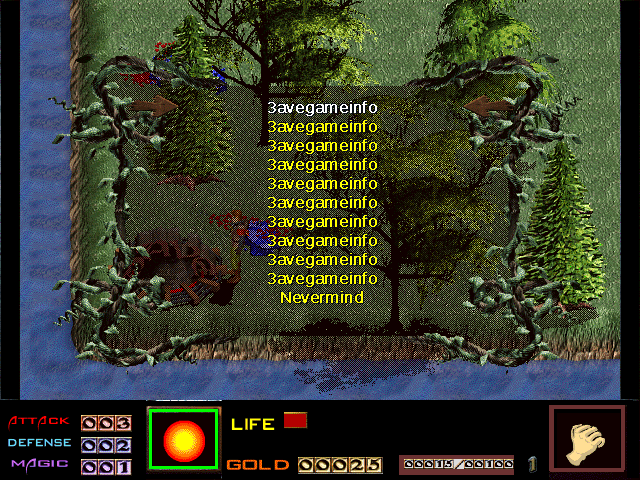 A DMOD without a goal or story isn't very impressive unless it does something special, and "Monstery Dimension" does not. Even if you just want the simple fun of beating up monsters, something like "Dink Arena" has more options. Still, the secrets are nice, and the way Dink keeps count might make you feel like you're achieving something. If nothing else, this DMOD gave us a spiffy bonca recolor. Wanting to use that recolor would be the only real reason to download this one, but its existence as a DMOD doesn't offend me.