Please Cindy, say the whole name each time.
I'm called Tim. I've been playing Dink since it came out, when I was a young, dumb kid.

Y'know, 2005 has been surprising me. There haven't really been any great DMODs so far, but the overall level of quality has been pretty high. There have been few of the best-left-forgotten DMODs that were quite common in the past few years. I hope this keeps up.

"Outlander" differentiates itself from the pack in several ways, and at least for as far as I got, I found it refreshing. In this DMOD, you play as "Logan," who is represented by the typical farmer sprite. You can attack using the scythe-sweeping animation that's been used in a few DMODs, but the range on this attack isn't anywhere near as long as it should be, making it hard to use. You'll mostly end up relying on magic.

In what I'm sure is a first, "Outlander" features three different status bars. You can switch between them by pressing the "X" key. 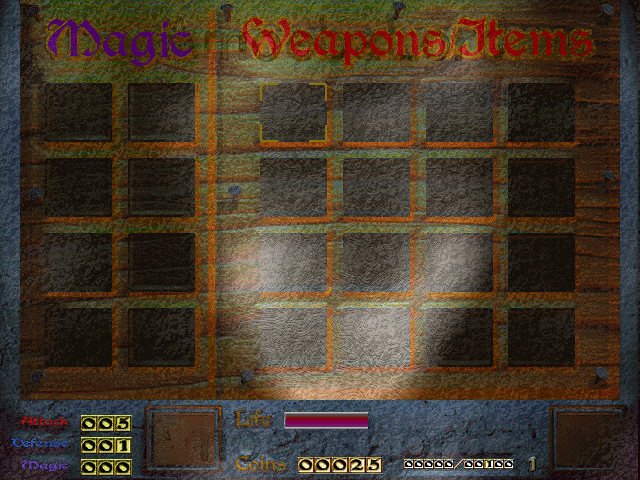 This one is used by default. I like it - it feels like a slight corruption of the original. The "Amoebalord" watermark makes it undesirable for use in other mods, unfortunately. 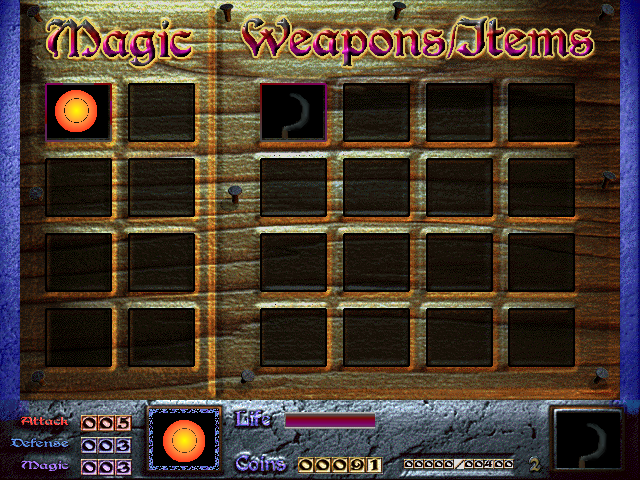 For those who prefer a more familiar feel, here's a bluish treatment of the original status bar. 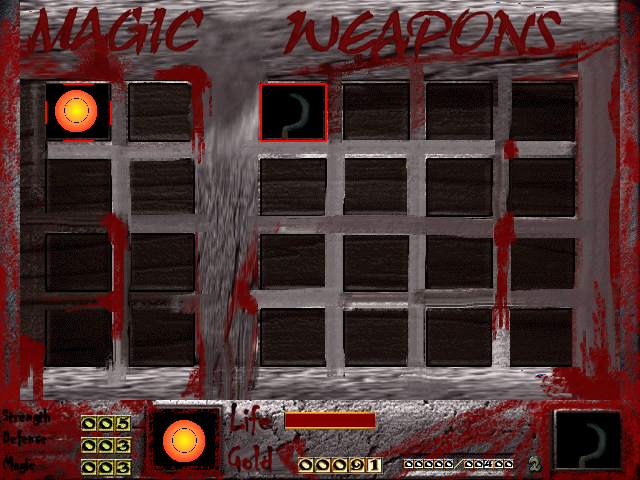 This mod also features some interesting new magic that is crucial for defeating the stronger enemies you can encounter. One spell creates a trail of flames that act like very powerful versions of the acid rain spell. Another new spell is a Hellfire ball that bounces from enemy to enemy, but it doesn't do enough damage to be worth using. There's a third new magic, but it's hidden (you have to walk straight through an ordinary-looking fence to find it). It just picks a random enemy and does 100 damage to them. Well, then. 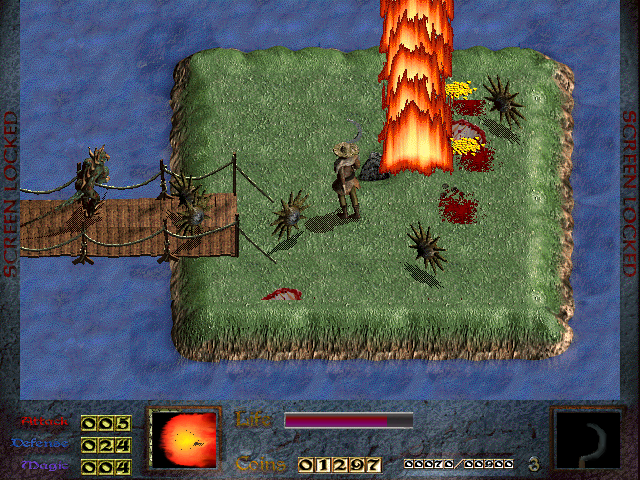 Here's one of the new spells in action. 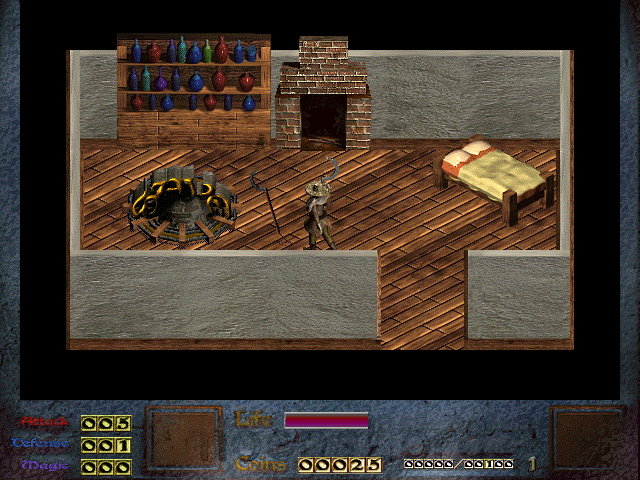 Other graphics have been customized too, like this golden savepoint that has a new, wavy effect.

As for the story, there's an interesting enough setup with some shadowy group planning to take over the world, but if it's followed up on in this demo, I didn't see it. I just wandered around the first area doing the many tiny little sidequests the game offers. Although I played the game for almost an hour, I never found a way to really advance the plot.

Maybe it's just as well that I didn't see all of the demo. Browsing through the story folder, I found a script in which Logan meets a fabulous man and sneers at him, "You disgust me." I'm getting sick of this kind of thing, man. I'm not totally against fabulous jokes, but it wasn't even a joke, just straight-up "fabulous people are revolting subhuman creatures, right?" This sort of thing is sadly too common in DMODs.

But enough of that. One of the sidequests involves killing Dink Smallwood. He's the mayor of the little town you find yourself in, and the local undertaker, hoping to profit from a famous person's funeral, offers you gold to murder him. It is shockingly easy to kill Dink - he doesn't fight back or even complain. Maybe he's just sick of it all. I also found it quite funny how easily Logan was able to talk the judge into letting him out of his death sentence. Logan's argument boils down to "The prosecutor is blind and stupid. Dink obviously died from some kind of disease, despite the fact that he was found dead from scythe wounds with me standing next to him holding a scythe." The judge finds this argument so compelling that he lets Logan entirely off the hook! Seems legit.

Actually, it seems that you can kill pretty much any NPC you please. Maybe killing everybody is the way to move on. I didn't try it. 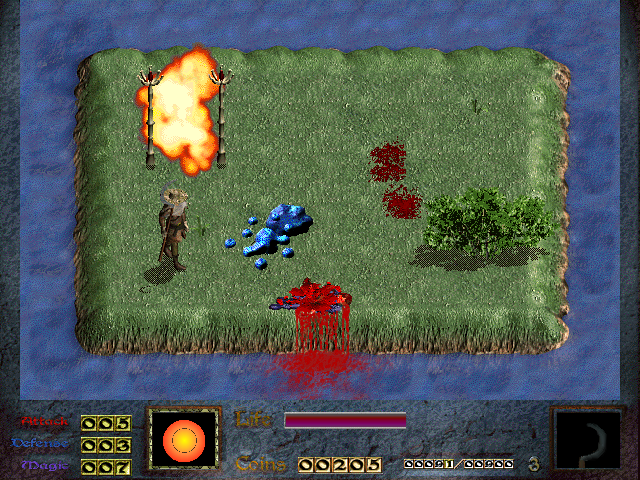 Corpses seem to have a lot more blood than usual in this one.

I didn't notice the game-breaking bugs that reviews talk about. The problems I saw were mostly visual, such as depth que problems and the usual "turning into Dink when you push" problem that is so common to alternate hero DMODs.

I enjoyed the "Outlander" demo for the new graphics and a different feeling than your typical DMOD. I didn't manage to make it far, but you know, I think I'm okay with that. Hey, I never called it "Crazy Old Tim BEATS All the DMODs."

In sports analytics (Run for the hills! Sports analogy incoming!), a metric called "wins above replacement player" is used to compare the value of players. This number represents how many more wins a player is expected to produce for a team than a "replacement-level player" would. The "replacement-level player" is a hypothetical player who stands for the sort of performance a team could expect to get by just hiring somebody new - somebody who isn't terrible, but doesn't have any skills that'd be hard to replace. A bad player will probably have a negative WARP rating.

It occurred to me recently that I've played a lot of what you might call "replacement-level DMODs." I'm talking about mods that aren't awful or broken, but are unremarkable and similar to the point where, if you were to replace one with the other, few would care. They have some enemies to fight, some kind of plot that you've already seen at least a dozen times, and more likely than not an attempt or two at a fourth wall-breaking joke (usually something about a "lazy author," a joke so old that "Quest for Cheese" considered it worthy of mockery in 1998). 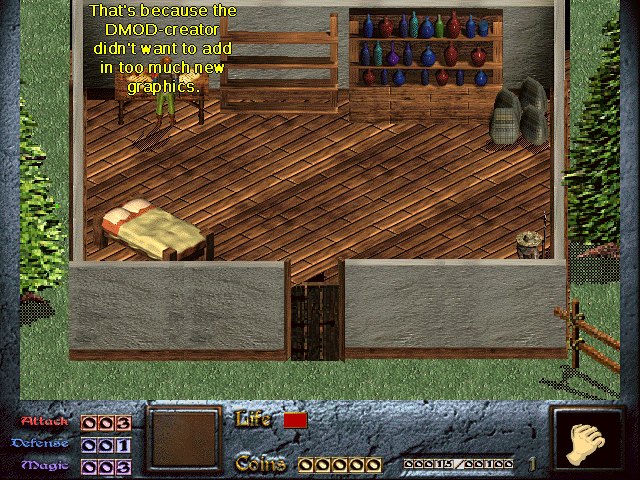 I don't mean to say this is a bad thing. It's a natural result of having so many games made from the same basic materials. Heck, if your first DMOD is in this category, you deserve some credit for not having released a crappy DMOD. Lord knows I released enough of them.

"Helpin' the Ol' Duck Farmer" was close enough to that sort of DMOD to make me think of that analogy, as it's rather simple and feels like a lot of other DMODs. However, it does have a few little features that I thought pushed its TARD (Tim's Above-Replacement DMOD) score slightly into the positive range.

There's something original in the setup. Rather than Dink getting sent on a mission by the King yet again, we're told that Dink found this mission on a board at the "Hero Unemployment Bureau," which is a very amusing notion. I wish we could have actually seen this, but it's still a novel setup. Dink soon meets the Ol' Duck Farmer, who informs him of a problematic Mother Pillbug. 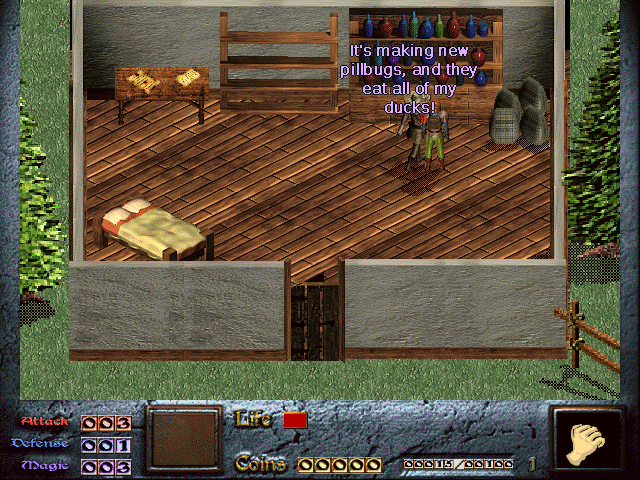 The ODF (that is what I am calling him now and forever) outlines the problem.

The incidental text is customized where it was possible to do so at the time. Text has been changed for the savebot, the death script and even the map key ("I don't need a map... I also forgot it"). All that old text from 1997 just reinforces the feeling that you're doing the same thing you've done before, so I appreciate it when a DMOD does as much as it can to change these things and give the player a fresh feeling, even if it's just the moment of recognizing, "Hey! They changed that." You know, I check the "Help" option in the escape menu for every DMOD. It's been actually changed maybe... twice so far? But I check anyway. 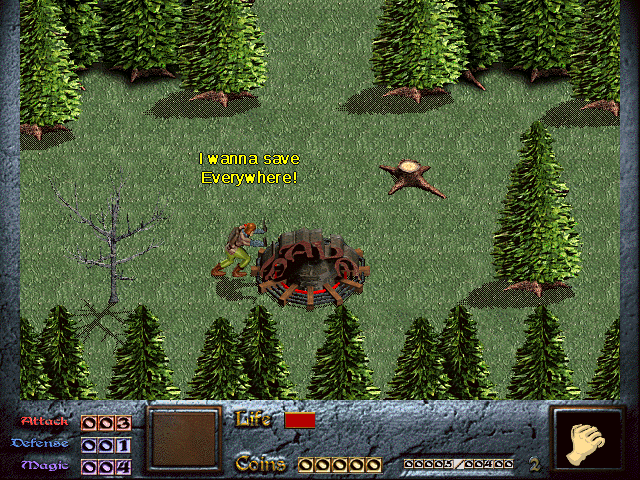 The savebot even has a push response! First time I've seen that. Several objects in this DMOD have one. Authors hardly ever bother with this.

There's not much dialogue, the only enemies in the game are pillbugs (screens and screens of pillbugs with too much HP), and the map has some bad tile joins (though I've seen much worse). There was something I liked near the end: a "resting room" with some guy hanging out in the dangerous pillbug cave. When Dink asks how he got there, he says that he just found himself there and he can't leave. Dink points out that he can't leave, and he replies, "you're not an NPC." It's a clever bit, and it's the same kind of exploration of what it means to be a video game character that I'd later do in "Malachi the Jerk," though it's a much lighter take. 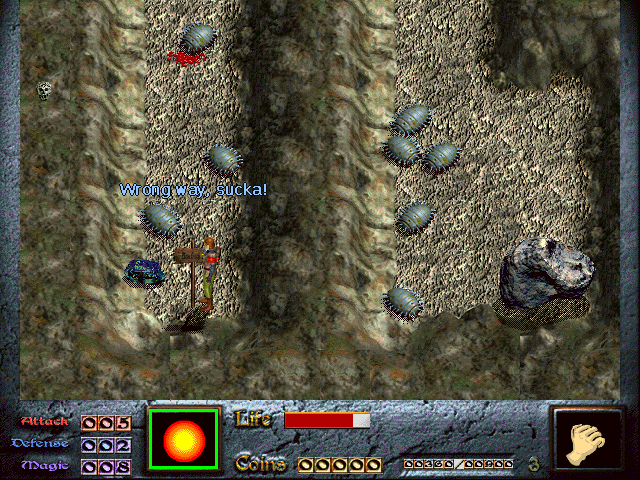 The boss appears to be yet another giant version of one of the common enemies, but the Mother Pillbug "gives birth" to fast moving regular pillbugs every so often when you damage her. This can become disastrous in a hurry, and it seemed impossible on my first try. On my second go, I realized that it's a lot easier if you focus on the smaller pillbugs exclusively every time they come out. DaVince deserves some credit for making a Dink Smallwood boss that benefits from a strategy more complicated than "hit and run" or "stay back and shoot." The fight might go on a bit too long, but I didn't think it was too bad. 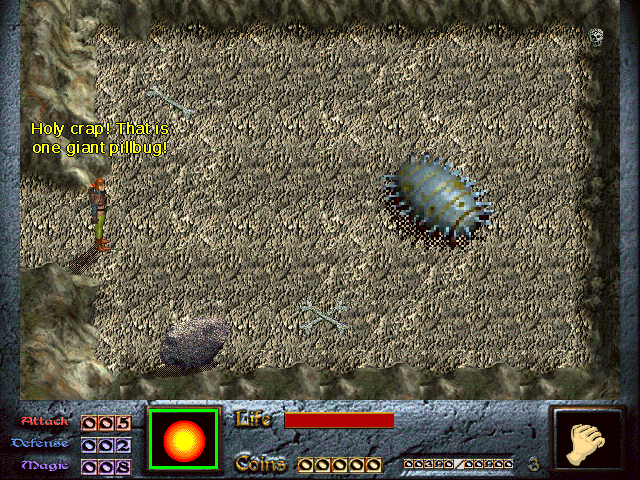 That's the second-largest... wait, "Back from the Grave" did that joke. Damn.

Don't get me wrong, this is still a middle-of-the-road kinda romp. There are a few bugs. Most notably, Dink is sometimes not frozen for dialogues. This is a big problem when you beat the boss. If you press talk, as you'll naturally do to skip the text that comes up, the screen will never unlock, and you won't be able to return to the ODF and report your victory. And then there's the fact that, overall, it's still just a bunch of quite monotonous pillbug-punching. But I decided to focus on those features that make it stand out a little, that give it some charm of its own. I'll remember it for those moments, and not for dozens of pillbugs that take a little bit too long to kill.