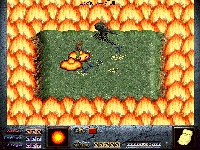 An interesting and original idea. I was not successful with the link-up, but it is still a neat concept. As a game this was actually fairly basic in construct, with its only true outstanding merit being that it gives you the option of playing multiplayer... that and of course the killer pig feed.

***Plot: This dmod seems to lack one... but that is alright saying that this was more of an action-arcade fair than an adventure.
*7*
***Graphics: No original graphics in this one, and use of varied monsters seemed rather silly to me as they can all be killed in one hit. the pig feed and blood graphics cluttered up in a few instances, making the terrian look somewhat disturbing
*7*
***Sound: The sounds were normal, and not too bothersome, put the pig feed did seem a little too (explosive?) for me. This only had one midi, which was a good one, except that it was too short and needed to either be extended or looped.
*7.5*
***Gameplay: Fun action game where you mindlessly blow critters up with pig feed. (What? were you expecting something else?) The levels needed to be more varied from each other, since they were exactly the same from one another except that you had to blow a few more things up and the terrain was differant... they still felt the same. A major flaw I found was that the level ended before I could finish killing stuff, causing them to kill me instead. (Don't understand... you would have to try it for yourself then...). Online gameplay is a boon.
*7.5*

What more is there to tell? This is a novel concept, though buggy and annoying, still an enjoyable little dmod. If you have sometime to kill then play this... if your still expecting rpg elements to Fairy Goodness, there aren't any really. I tell you this so that you don't go expecting to slay dragons and rescue damsels in distress or anything like that... All you do in this dmod is blow stuff up with pig feed- trust me.I hope to see more use of multiplayer dmodery in the future... saying that this SOMEONE turns out to be a somebody, and not nobody...
Featured Review: A Dmod with Multiplayer Capabilities
January 12th, 2004
v1.00

A DMOD with multiplayer capabilities.

I havent' been able to test the multiplayer stuff, but the other stuff is worth commenting on.

This is version 2.00 which has been updated.

You have one map which is a square island (or that's as far as I got) and you fight monsters by "throwing" fairy goodness (i.e. pig feed graphics) at them, which destroys them completely. You have to kill all the monsters of the level and stay alive.

I didn't see any health potions or hearts, but I didn't bother to check my inventory...

I played the first two levels, but got bored. It seems when you approach the kill count needed to advance to the next level lots of monsters appear. If you stay out of their reach they end up attacking each other, and usually killing each other, so you get credit for that. This I found a detraction, as a mass of them would appear and within seconds, without me doing anything, I had finished the level.

Overall I give this 7 out of 10, it would normally have been 6 but the bonus of multiplayer deserves an extra point.

I think it could of had better planning of spawning monsters - especially the multiple monsters. Using corners of the map, and the centre - with a selection of pre-defined patterns perhaps...

Play it if you are curious, bored, or like mindless mayhem
Featured Review: Storyline: This is a Sort of Arcade Game with At Least Four Levels
June 6th, 2003
v1.00

Storyline: This is a sort of arcade game with at least four levels. There is no intro in the game, but you can read the short story in the readme file.

Map and graphics: The map is simple, but fits the purpose. No new graphics.

Music: The music is good and gives you a sense of excitement.

Good: You can throw seed and enemies will explode when walking over it. You have to get used to this, but once you have figured out how it works, it is not only easy, but also fun. Enemies can also crawl out of dead bodies. You have got a superbomb, and that works really good.

Not so good: The game crashed every time I reached the end of level four.

Overall: A nice game, whether you play it online or just for yourself.

Hmmm, well then to begin with I would like to say a few things. First of all, thankyou for spending the time to give the Dink Network the chance to play Dink online. Although this is a small D-MOD I believe it helps us lots. I think that lots of the people that have reviewed it havn't actually tried it online. It should be a bit more user friendly, yes, but the scores given my many of the people here are what I would call, unfair. I give a big thankyou to Someone for giving us this oppertunity. Well done

Well, playing online is a strength, a very big strength too. I think that Someone has put a lot of time into this. I think that playing with pig feed of doom is a funny and fun way to play fairy goodness. I also think the limitations given to the fireball is very sensible. The way the monsters get harder to defeat as the game progresses is very well done also. The possibilities that can arise from this D-MOD are outstanding. A great must download!

As I have previously said the user friendly interface, is, well, not very user friendly. A dedicated server will be a good achievement, maybe with another version a server can be set up, eh? I also think that there will not be another version, I know this is a very late review. As a result, I know that there have been no updates at all. This is, as always with most files, a bad problem, as as soon as all of the fun has been extracted out of the D-MOD, there is no fun left. This is what causes a game to get, old.

I think that in another version a more friendly userface should be implemented. Also, If there is not another version, I think somebody should consider it. I think that, being a D-MOD with multiplayer capabilities helps greatly and that, using this as a base, can acheive some outstanding work. I think that "someone" whatever his name is, should update the D-MOD and maybe contribute to the Dink Network even more than he has by setting up a dedicated server, or someone else that can do this. This would be very helpful

Pros: the idea is unique, you kill creatures with explosive pig food and fireballs. The music sounds nice, it was originally used in (I am almost positive) a game famous for its music, called Ys (not sure how it is pronounced). Also it has the ability to play online.

Cons: the levels are monotonous, they are basically the same, except with different backgrounds. You don't even need to kill a set amount of creatures, you just have to wait, then it turns black and the enemies kill you, and you end up on the next level, dead.

Overall: A fairly (maybe even fairy) good d-mod, with a unique idea, as I have said before, where you get to use pig feed as a weapon, finally a good use for pig feed!

Very interesting idea. I wish the source code was available (not just the .d files). I gather that the gonline.exe and run.exe are just socket tunnels (like netcat in unix). I'm interested to know how Dink.exe can use those tools. Does Dink open a process pipe? Is is reading a file? There's no process/thread management available DinkC and the tools to interact with the system at large are limited.

This is a promising beginning to what could be an interesting hack. Good proof of concept.
Multiplayer Dink
June 17th, 2002
v1.00

Multiplayer Dink. Sounds cool doesn't it? It sure is.
Fairy goodness brings multiplayer in only a limited way. You can duke it out with another person by using their ip and the programme that is included on a single screen. The objective is to kill as many monsters in as little time as possible. The one with the most kills wins.

If there were more screens to battle on, more weapons and abilities, more... You get the picture. Anyway, give it a try together with your friend. You are sure to have some fun with it, be it not for a long time.
This is a Battle D-Mod in Which You Can Play Online with One Other Player And Detroy Monst...
April 17th, 2002
v1.00

Destroying noobs since 1999.
This is a battle d-mod in which you can play online with one other player and detroy monsters with fairy dust! I really wish someone would create a client so we can have a deticated server in which more than one play can join. I give it a 8.0 becuase it's a good set in making multiplayer games for dink, but the interface for the game is alittle hard to use for the newbies.
You Don't Need Icq
February 9th, 2002
v1.00

you don't need icq.... you only need to know your ip adress (start-->run-->winipcfg-->got it!)... your friend can type your ip adress in fgonline.exe and play it! it is the only dmod with multiplayer option, but haves a small arena (cool new gfx!)... my rating: 8.0 (i am busy with fairy goodness online v2.0 with bigger arenas and it fixes the 'don't fade up' bug (if you die, you can choose from Quit or Restart (it is too dark to see what you've selected) if you choose restart, it doesn't fade up again!)
Exactly
February 9th, 2002
v1.00

Exactly, it's the only one of it's kind.. Even playing it alone for a few rounds was fun, but I guess it would be super cool if I had ICQ

I just don't happen to have one.
OK, so graphics were like in most dmods, basic would be a good word, and using the pigfood as explosive.. *heh* fun. This is a good Dmod. might be a reason to concider getting ICQ.

This game is the only one of his kind, that's a big +. Cast greatest harms explosions with pigfood +. Small assistence of your (magic ball) screenremover +. Small field -. Nice background +. Complicated multiplayer options -. But it HAS multiplayer options +. Too bad i don't exactly know how to play multipl. but it woud proberly be fun. Couple -'s, couple +'s, I agree with Jveenhof that it's the only Mod for Multipl. but there are some -'s so i say a 8.5
I Didn't Like the Game Much
January 28th, 2002
v1.00

Lazy bum
I didn't like the game much, but if I'd be able to play against some Dinkers, I'd surely enjoy it. However I don't have ICQ

GRAPHICS 5: Very poor, without any details.
SOUND 6: Average sound, a nice new sound though.
GAMEPLAY 7: Online play is verrry cool, but the one player is very dull.
LASTING APPEAL 8: You could play a long time against fellow Dinkers. Too bad for me

I dont agree with DethLords review of this DMOD. Yes its small and simpel but its the only DMDOD with multiplay options around, and I think its brilliant. Ive played online with quite a few Dinkers a while ago

remember Wolfblitz? you kicked my ass..
Im gonna give its the highest mark er is because its the only one in his kind.