Note that while I use FreeDink as a comparison below, I previously compared FreeDink to v1.08 and confirmed they have the same behavior in Bloop's Purpoise version v1.01.

1) Dink Smallwood HD shortcut icon (and icon for dink.exe) is a generic program.

2) Mouse behavior is weird; need to click-and-drag mouse to move the mouse cursor, can't use mouse to select a save game from a dialog box when mouse mode is on (like when clicking 'Load' from the title screen). I haven't used the original DinkHD much, so this is probably the same?

3) On the first screen, several rocks are not drawn. 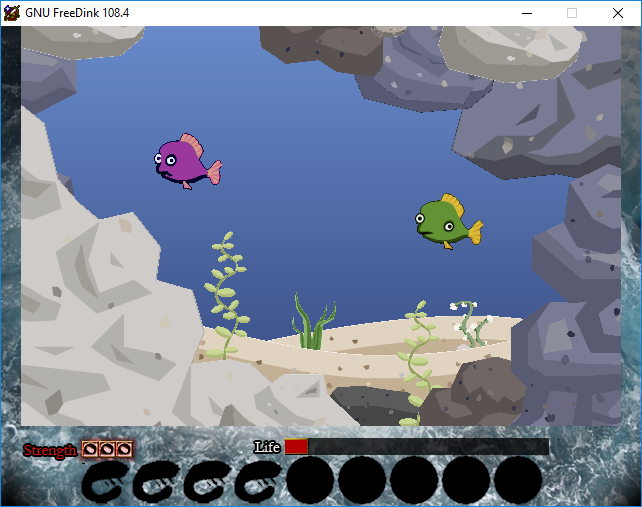 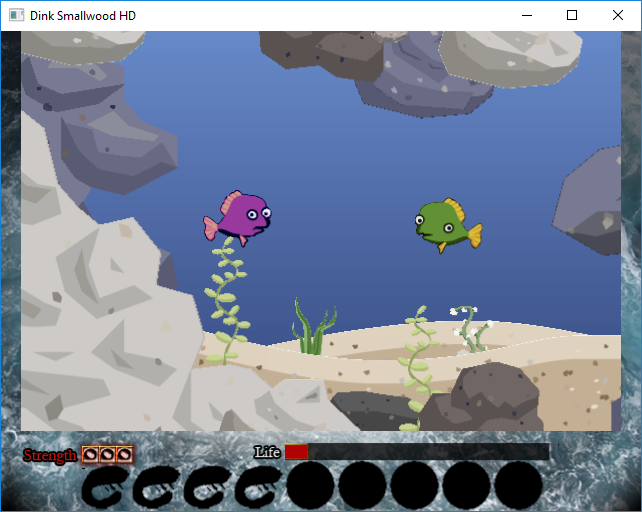 4) When resizing or moving the Dink HD window, the background disappears and the status bar goes wonky. This also happens when loading a quick save: 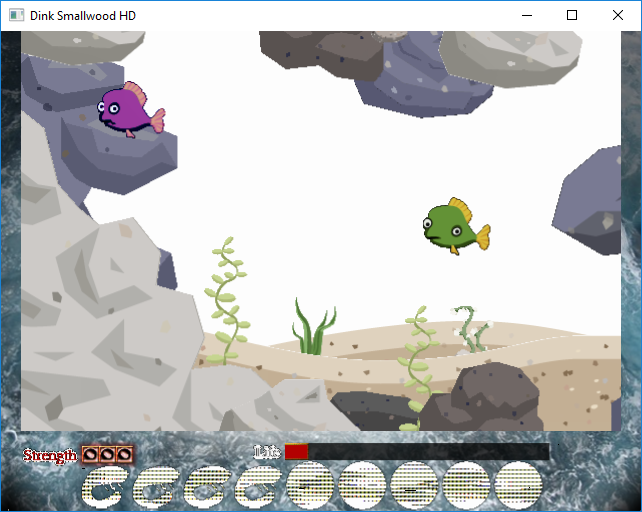 5) When changing screens to the right, there is a weird black line drawn beneath sprites during the screen transition. This line does not appear when transitioning left, up, or down. 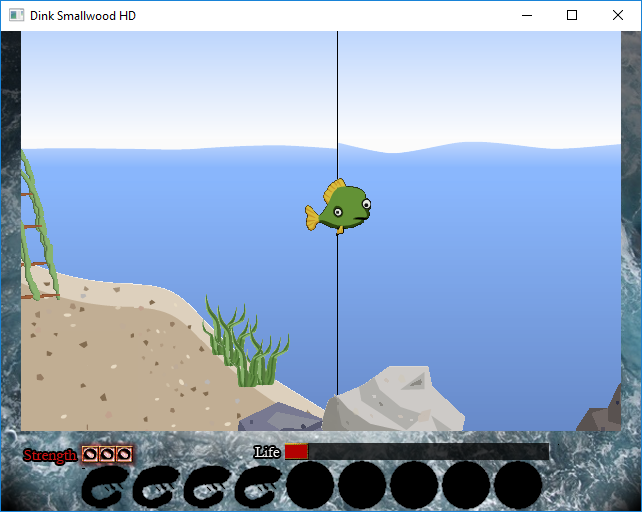 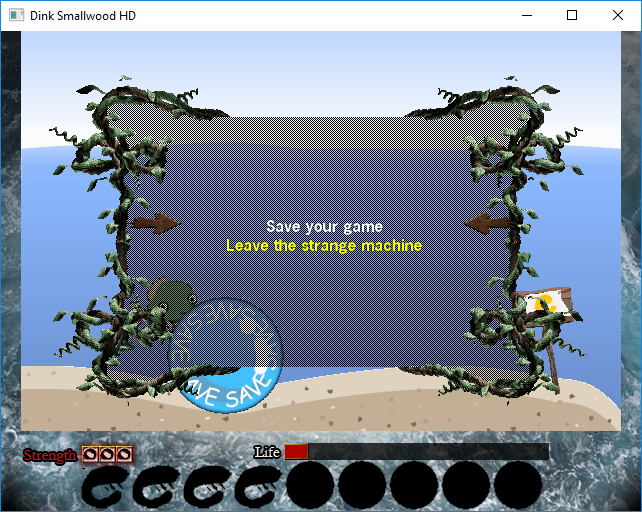 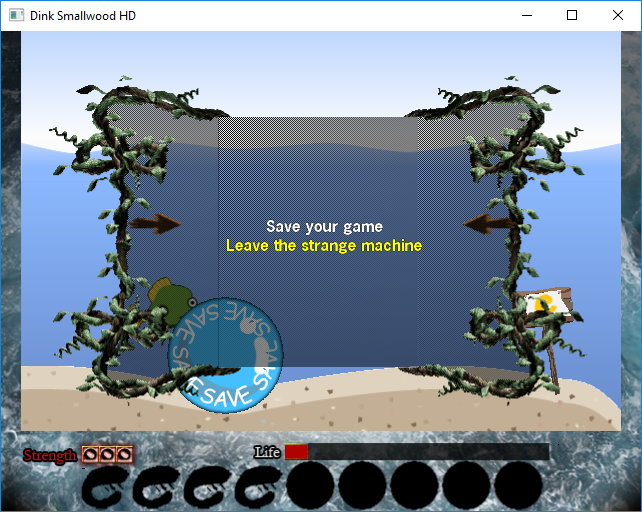 This appears to look correct when first loading the game, but if you click on another window (like Chrome) and reactivate the Dink HD window, then it looks wrong.

7) Screen 586 rocks are drawn at the wrong spot, causes the cave to already appear to be closed in DinkHD. 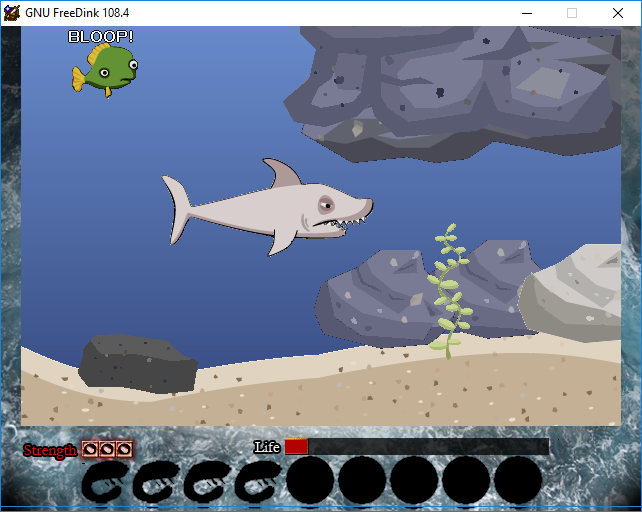 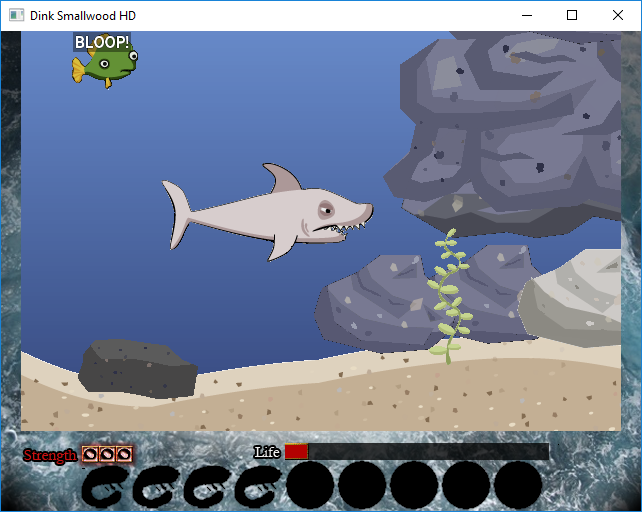 8) It looks like scripts attached to sprites aren't executed until after a screen transition. Some D-Mods (like this one) draw new items to the status bar by attaching a script to a sprite, and relying on that script's main method to be executed before the screen transition.

Here are some screenshots during a screen transition: 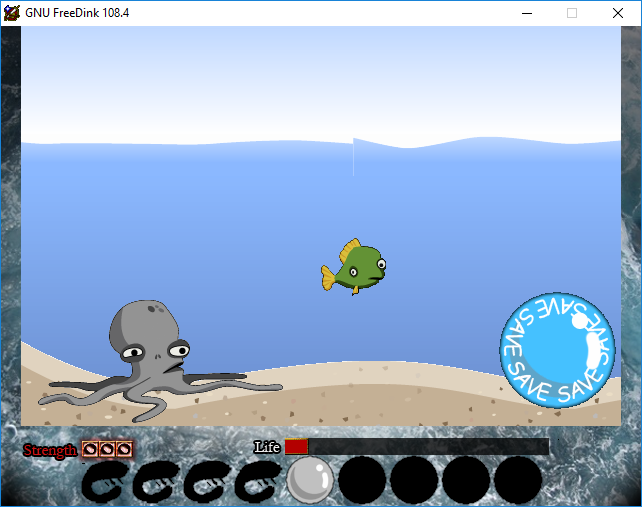 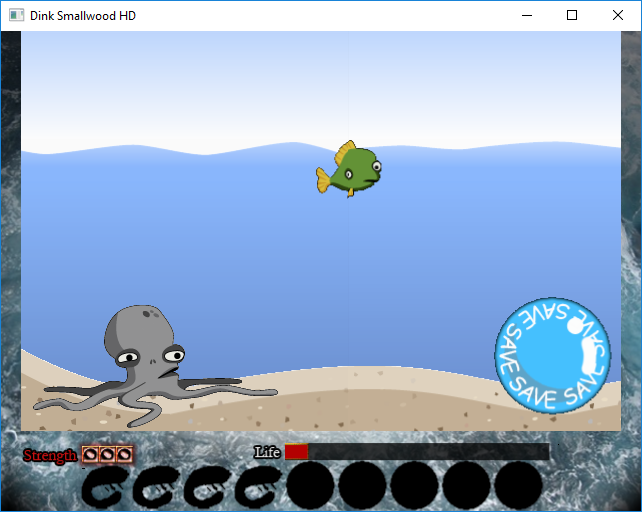 9) Grey text (`6) is hard to read. Could there be an option for 'classic' text rendering? 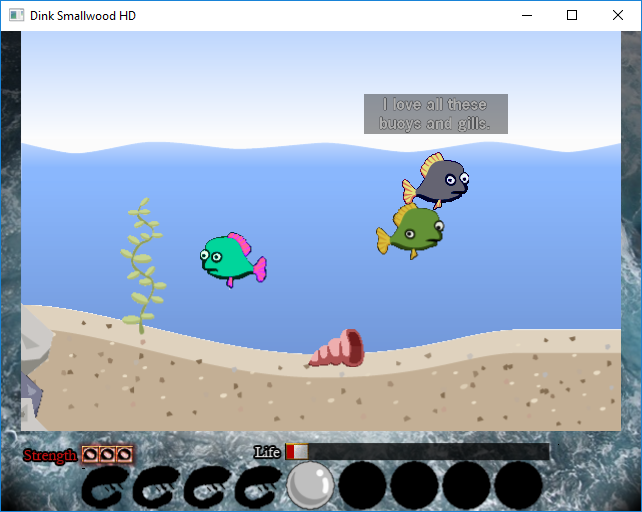 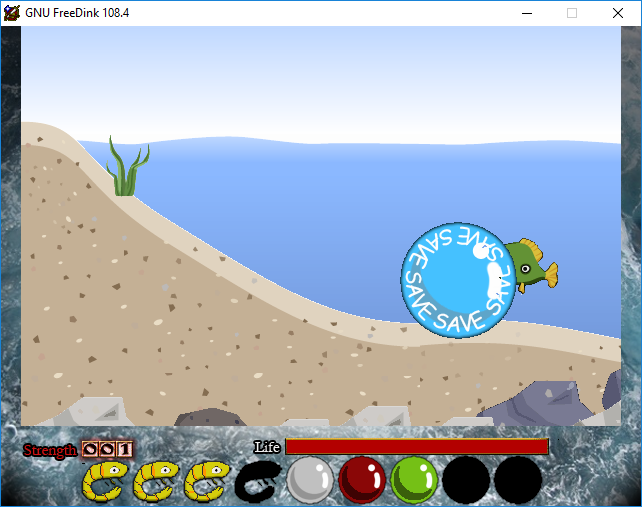 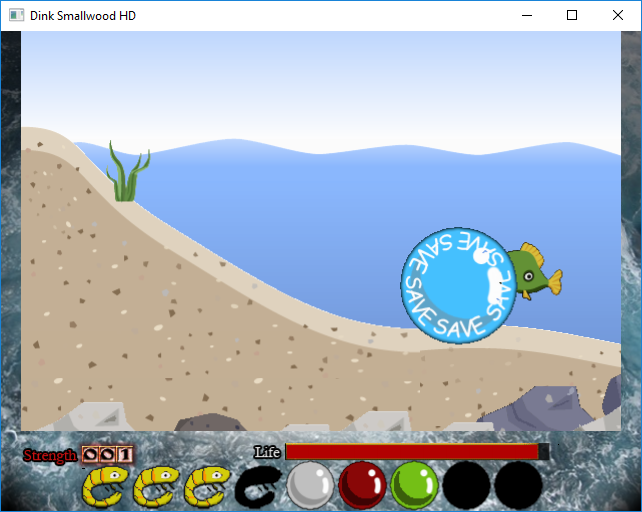 11) For some reason Dink doesn't appear in the 'One Hour Later' section of this cutscene in DinkHD. 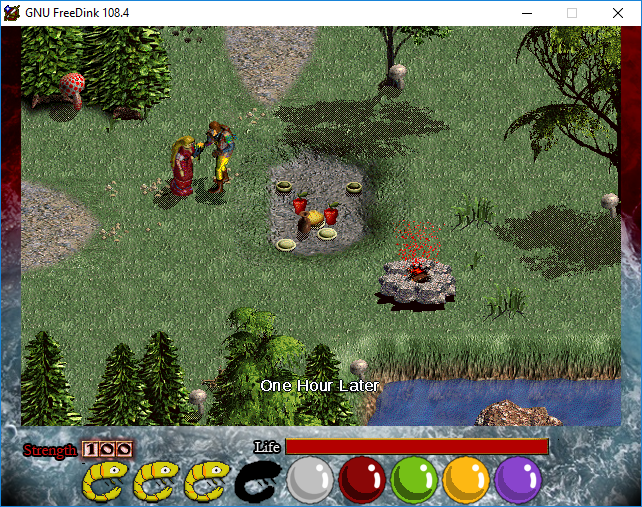 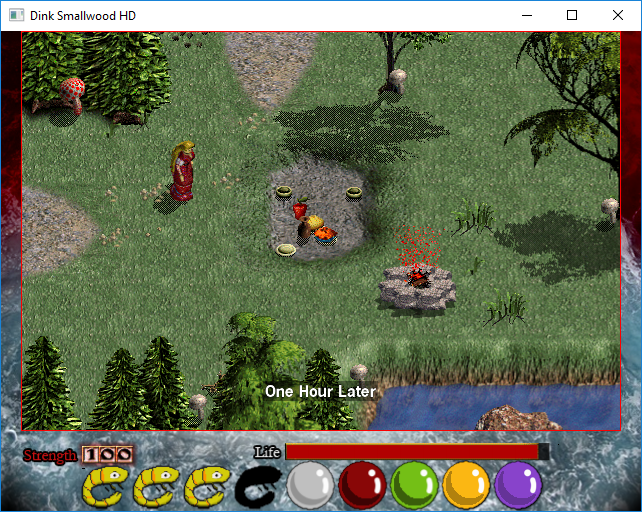 12) Can't use fill_screen(0) to stop drawing status bar during a fade_down? 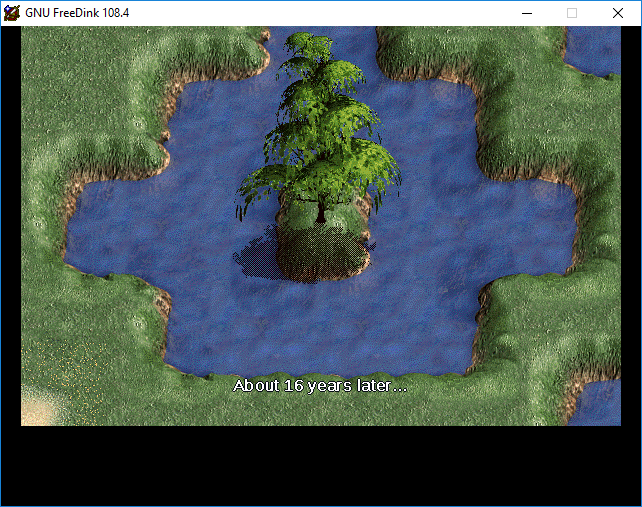 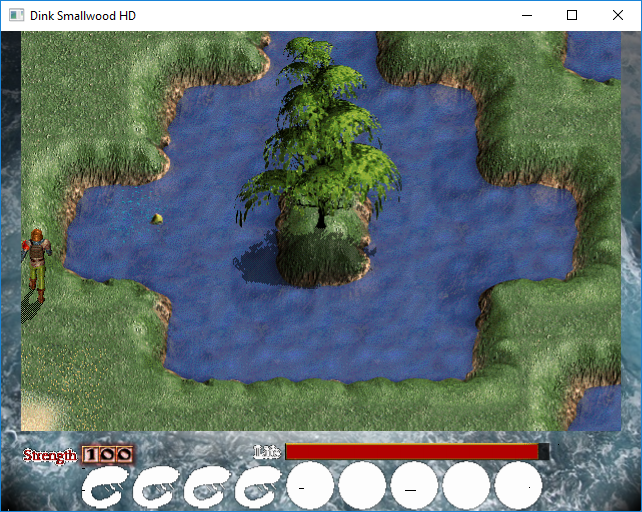 Here's a quicksave (talk to well):

13) On the title screen, the first time you move the real windows mouse cursor out of the boundaries of the DinkHD window, it sounds like it triggers a mouse click.
Reply
Re: Dink HD 1.7.0 Beta Report - Bloop's Purpoise
September 12th 2017, 01:16 AM

A mother ducking wizard
Ran with 1.7.1

12) Not fixed (status bar still drawn, but the weird white background on part of the status bar is fixed)

I haven't fixed the issue where GUI overlays aren't drawn during the screen transition (old Dink simply doesn't update the screen, but in GL we sort of have to.. it's fixable, but leaving it as low priority) but the other things might be fixed now. I had trouble getting far enough to see the "One hour later" cutscene, I got "momma don't like cheaters" and I exploded... :'( I only did one "refill life bar" cheat! How else can I cross the dry land part repeatedly?!?!
Reply