Revenge of the Ducks 2

This is the sequel to Revenge of the Ducks I.

Ronan is back again, but now he is a warrior duck. He is not alone though. When travelling through Xanatos years ago, he stumbled upon a hunter who just shot a bonca.
Ronan scares away the hunter and tries to rescue the bonca, but to no avail. The bonca turns out to be a mother. She has a baby son and she asks Ronan to take care of him. Ronan raises the little bonca Billy, and when Billy is a full-grown bonca, Ronan rides on his back. This is real funny; not only do they interact almost constantly, but they also fight together. Billy uses his tail and Ronan the fireball spell.

Map and graphics: No new graphics, but the window in the prison. And of course the combination of Ronan and Billy.

Good: The idea of a duck riding on a bonca. The humour in it, which stems mostly of the conversation between Ronan and Billy. Ronan moves on Billy’s back like a horseman. The title screen with a moving duck on it.

Not so good: Some hardness errors on the bridge. The bug Kyle mentioned. There is not really an ending; you are just about to travel further, and then the D-mod is over. Although both Ronan and Billy can fight, you do not need to fight to end this D-mod. There are some pillbugs you can fight, and fighting with a bonca is a nice change, but there is no reason to fight nor for levelling up, since there is no end boss. I thought there were no savebots, until I discovered that you can save by pressing escape - some hint would have been helpful.

Overall: A much better D-mod then the first adventure of Ronan.

Rewenge of the ducks 2- A grat DMOD. Really better then first one. The ronan Rides in bonca's back! I liked how they read signs, like: -Ronan.. -Yes Billy? -What is writed here? -Well, lets look. Its writed: ..." Or how they attack (When ronan shoots fireball, billy says "Blast them, Ronan" and when billy attacks with his tale, Ronan says"Hit them Billy" Or something like that.) ok, lets rewiew:

Plot:
Well, you will have to kill the master of lands where Ronan starts... But the end is in other part. There you have to help to the peoples, and kill the Guard.

Graphics:
Well, no new Graphics, exept Ronan The Duck On The Billy's Back. (yea)

Bugs and Weakness:
Well,I think there is no weakness. But there is one bug- I think you will find it...

Overall:
A great DMOD. Better then first part of "ROTD"
Worth to Download...(I think This Romp is best in its category).

Revenge of the Ducks 2

As we move on to the next installment we can discover a lot of improvements, but also some annoying things. But first, the good things.
As simple as the story may seem, it works well in this case. ROTD2 starts out with Ronan the duck, travelling through the kingdom of Xanatos. On his path he finds a wounded bonca, shot by a hunter. After scaring the hunter away with a fireball, he tries to help the bonca. Unfortunately it's too late, but before it passes away the bonca asks Ronan to take care of his baby bonca, hidden in some caves. Ronan accepts the bonca's dying wish and looks after him. Since the baby bonca didn't have a name yet, Ronan calls him Billie. When Ronan and Billie return to the land of Xanatos some time later, the player can start his next adventure.
Throughout the d-mod you'll find nothing out of the ordinary, for the exception of the new main character you play with. You don't play with Ronan alone this time, but also with Billie. When you fight physically, Billie will slash the enemy with it's tail (the normal bonca attack), but when you cast magic it's Ronan turn to roast the enemies.
There is one new magic in store for you, but only in the end, when you will never need it since the story ends at that moment. It looks like a normal fireball, but when it hits something, it leaves a flame behind.
And that's it... Or isn't it? Of course not. I mentioned there was something annoying too, didn't I? Well, I understand that every big d-mod suffers from bugs, which are normally solved in later patches and that will keep the player happy. Unfortunately, this d-mod isn't much bigger than it's predecessor and still it suffers from some bugs that can really destroy your savegame. First of all, there is a bug in the game which you will only notice later on, perhaps even after you saved and so you will have to restart the entire d-mod. I'm not going to tell you what it is, because it would ruin the story. The only clue I can give you is : Do NOT take the mushroom before you are told to!
For the rest there are some hardness issues and on some occasions you will be able to end up in the water, etc...
Mainly, this d-mod is just a preparation for it's sequel.

Story: Ronan the duck is a great warrior- and hero duck afer he defeated the hunter. Ronan scares another hunter off a dying Bonca, who asks Ronan to take care of his son. After many years, Ronan and the Boncaboy that he started calling Billy, have arrived back in the Land of Xanatos (or Xanotos). They meet a druid that tells them to defeat evil Lord Xanatos (or Xanotos). And so, the quest begins.
8.5.

Map: Map is very standard style. Not very much details, but not too few.
6.0.

Graphics: Graphics are nice. There is this new graphic showing duck sitting on Bonca, and it is used with Ronan and Billy. I can't remember any other new graphics.
7.5.

Gameplay: Gameplay is nice. Not's much fighting. It's more like talking to everyone and find the right place to continue. It had nice use of the lantern. Also, it's nice that you can hit with Billy's tail, and shot with Ronan's fireball. So, you actually use them both.
8.5.

Bad: Well, it COULD have had more detailed map, but that's not very necesary. There were a few bugs. The ending could have been planned better aswell, but that's only what I think.

Overall: 7.5. A nice romp with some new graphics. You definnitely should check it.

Fit for: Anyone who wants to play pretty short (Romp) D-Mod with good story, some brainpuzzles (though, they are minor) and a few new graphics.
Plot
December 4th, 2004
v1.00

GlennGlenn doesn't want a custom title.
Plot.Lord exanatos is sucking energy from the world, so he can get immortal.
This plot ain`t about this, its on the way to lord exanatos. But you get the honor to kill some guards and save the townsfolk 'couse they haven`t payed taxes, (They probobly too high

The world could always use more heroes
The duck lover sequal. This time you are riding on a bonca. Better than the original. The storyline is great, the map is good, some of the music is from DoomII, the graphics are good (but still nothing new), and the plot is ok. My ratings are...

Good
====
A big improvement to the first one. Ronan now has a new friend, Billy the Bonca! Ronan the duck gets to ride Billy, who helps Ronan on his quests. Its really cool when Billie and Ronan say supportive things when you attack or cast spells which is really cool. Also, there was alot of funniess in the d-mod, which i like.

Bad
===
There were minor hardness errors and at some areas you can walk on the water. There wasn't much fighting and you can pratically run through the d-mod because there was no end boss.

Overall an improvement to ROTD1 and when I beat ROTD2 I was really anxious for ROTD3 because the author kinda left us hanging at the end. 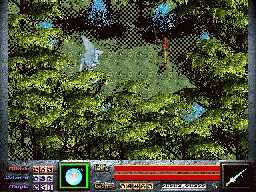