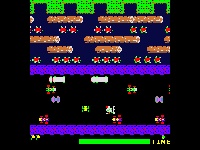 I Bring Tidings of Spam
Very well done. It seems to me this Frogger version works very well. No sound. Thats the downside of this.

Yeah, it's a DMOD, so I have to review all the normal points of a DMOD. But since there is no story, whats the point? I just have to!

the gameplay is just like any other frogger game: Get to the bushes on the other side of the screen a few times to move on. Simple, but somewhat fun.

A perfect clone of the graphics here. 8-bit renditions of everything! Bushes, water, logs, crocs, snakes, cars, trucks, turtles, everything!! I always liked frogger best in all it's 8-bit glory!

Overall, This is a great clone of Frogger. Though I have no idea what it relates to Dink, but wtf cares? Frogger is an atari classic, and this is the best clone of it I have ever found.
In Frogger
April 13th, 2003
v1.00

In Frogger, you have to move several frogs across a road by dodging cars, and a river, by jumping onto logs and turtles to get to the other side.

Overall, I think it is a great game, even if it's only a demo. Brings back a lot of memories.
I think everybody should try it.
An Arcade Game Based on Frogger
September 22nd, 2002
v1.00

An arcade game based on Frogger, which I have never played.
The graphics are really good and it is funny to play an arcade game, in stead of a D-mod, with the Dink engine.
The only mishap is that it can be boring quite soon. But if you love to play arcade games, you will probably like this one too. No guarantees though!
This is a Simple
March 13th, 2002
v1.00

This is a simple, rather dumb game that is fun for 10-15 minutes, although it has a few bugs (the two deaths for falling in the water bug that the author is aware of but hasn't fixed, the music just stopping after awhile). The graphics are so bad in places that I would die because I thought that I had to move when I didn't. It's a mildly amusing demo and a nice adaptation of the Dink engine, but 9.2? Give me a break!