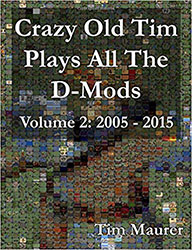 Crazy Old Tim Plays All The D-Mods Volume 2: 2005 - 2015 is now available to purchase. This volume weighs in at a svelte 398 pages. For more details, please visit our book page.

For those of you who missed the announcement about Volume 1 and haven't been around the Dink Smallwood community for a few years, something really cool happened a few years ago. Tim Maurer (aka CocoMonkey) decided to play through every D-Mod ever released, and write about his experiences as he went. He decided to call this project 'Crazy Old Tim Plays All The D-Mods' (COTPATD). Along the way, he covered all 355 D-Mods, and wrote just under 300,000 words in total. His writing was pretty darn brilliant, and was witty, thoughtful, personal, and hilarious.

Some examples:All of these great quotes, and more, can now be shipped straight to your door and sit on your bookshelf (for a little bit too much money).
Comments (10)Link