Hotel of the Middle Night

Description
1.The Ritual has started... the longest ritual in the history of us...
2.But what is the meaning of this ritual? We, humans, know so little...
3.But is there someone who is wiser than us? Someone who could say:
''Who is the one to stay, and who is the one to leave? Only one thing
can decide that. You can hear it's voice when you die.... Middle Night''

- The Book of Dark Phoenix Chapter 5

- The Hotel of the Middle Night

During an adventure Dink finds a hotel to sleep at.

But when the night falls, Dink notices, that the adventure isn't the only thing to worry about.
Version 1.02
Let's Play (DSPT)
Featured Review: Nice new style that works well
January 2nd, 2010
1.02

You feed the madness, and it feeds on you.
Well, I've got some spare time, so I thought why not post up a review for the Dmod that I played before I left?

Foreword
As far as I know, this is the first attempt at a Dmod purely focused on the horror-theme, as in a no-fighting and no-action gameplay style - just talking, solving and decision making.
I'm pretty sure there hasn't even been a horror-themed Dmod released, let alone one of this style, but I could be wrong.

Story
The story of this Dmod can seem quite confusing and complex at first, but this might just because the first time I played it was around 3:00AM in the morning(tiredness messes with your mind). Anyway, it is as follows:
Dink is on a quest to stop an evil cast plot and on the way he finds an island, so he decides to stay on the island, in a hotel that he finds - 'Hotel of the Middle Night'. That's the intro, and the player is introduced to it through text. A proper cutscene intro could have made it better, but it still worked.
When you start playing, you are soon introduced to the different characters, and their personalities, although you won't gain as much knowledge about the characters if you don't actually choose to talk to them manually, but most of them are introduced either directly or indirectly through later cutscenes.
As you talk to characters and watch the cutscenes play out, you discover more of the storyline which includes the history of the hotel. The further you play, the further the story unfolds and the more you start to make sense of the history of the hotel and put all the pieces of the story together. I won't be spoiling the story here, but I would just like to add I like the way it ends, as most of charactes end up turning out to be someone else - someone they weren't... very deceiving.

Graphics
This Dmod uses a few new graphics, including a cape and a caped guy, and they are used well.
Hotel of the Middle Night also uses other Dinkers graphics, such as the night tile graphics, and it really fits in with this Dmod. If this Dmod was set during the day it just wouldn't work.

Gameplay
The gameplay revolves around talking, puzzle solving and decision making. This system worked well for this type of Dmod, but one thing I didn't like was that it seemed like the emphasis was more on the gameplay in some situations, with no concise explanation as to the point of carrying some parts of the Dmod out. It felt like it had no point or story behind some of the smaller events that took place throughout the Dmod, like you would just find yourself going around the island searching everything you came across because the objective for that specific point in the storyline wasn't exactly clear. But aside from that, it was good. I liked the way in which you had to Talk to people to try and solve the 'mystery' of the hotel and eventually uncover the truth.

Game sounds and music
The music and game sounds were definitely used properly and in the correct situations. They fit the horror-theme well and added to it. This was one of my favourite aspects of this Dmod.

Overall
Hotel of the Middle Night was a good, well-made Dmod and I enjoyed playing it. Even though certain parts may have seemed a bit bland, the new system and the style of this Dmod worked well for the most part. The one thing I have to commend the author on is that as far as I know, no one has attempted a Dmod like this before, and in my opinion, this Dmod was quite creative.
I cannot simply say whether or not you should download this Dmod, or determine if you will enjoy it, nor can anyone else - It all depends on what type of game you like, since this Dmod was made with a completely different style of gameplay. 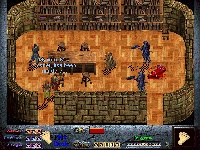