Description
The town of Beral is affected by evil across generations.
Version v1.3
Let's Play (DSPT)
Featured Review: This is One of the Three Entrances For the Alternative Hero Romp Dmod Contest
September 26th, 2002
v1.2

This is one of the three entrances for the Alternative Hero Romp Dmod Contest, written by Dan Walma (redink1).

Unlike most of the existing dmod's, this one is not your typical game. Basically, you are playing along a pre-set storyline. All you can do is like a inexperienced director trying to layout a script written by a superb writer. You even cannot do anything about the film editing...

There are a few different time frames, and you are forced to jump from one scene to another. It is just like a suspensive film. You have to be clear-minded to remember what is going on, and in the end you will know the whole picture. In general the plot is well thought, although some of the plots are not as clever as the other parts, and some of the storylines can be told a little bit more. But in fact, it is better than most of the hollywood films out there. ;p

There are quite a few new tricks in this dmod. The new menu page is a nice surprise. The way the author changed the seasons by applying different palettes is just excellent. From now on, authors can have another methods (and tools) to make their dmods even more colorful! In different scenes, you are playing different characters. Some of them have some fighting to do, but most of the time you just have to walk up to certain screens to let the plot continue.

However, this is NOT a film. This is still a game. Despite very original, the gameplay tends to become a little less interesting as the game goes on. Although the total number of the screens is not that big, a few times going back and forth (even the season changes) becomes a little repeative in the end. One or two new fighting skills might be able to add a lot more aspects to this dmod, but oh well. The autosave is somehow not so good, but since you don't really have other subquest to do, there is no immediate need for different save.

In short, this one is by far the BEST dmod created by redink1 (Yes, FIAT and EOT2 included). The screens are filled with lots of "things" that reflect the corresponding seasons. Rich plot and truly original. It shows a possibility for a game of the same type to have a multiple endings and lots of sub-quest. For this game, in spite of its rich content, it is still a romp (or a weirdo, ;p) and you can probably finish it within 15 to 20 minutes.

It is very hard for me to decide what the score I should give it. Most of this game is just brilliant, but some of it still falls short. I guess I am expecting a lot higher from the webmaster of Dink Network. 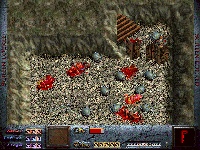