Way back on September 30th, 2008, Joshriot announced a "DDC D-Mod Contest," inviting submissions of D-Mods that involved the Dead Dragon Carcass cult in some way. No entries were submitted, but Erwin kept working on his entry and released this demo over a year later. It's a huge file for a D-Mod due to a large amount of included graphics and two songs in .WAV format. The new graphics come from a variety of sources, which are all credited in an attached text file. 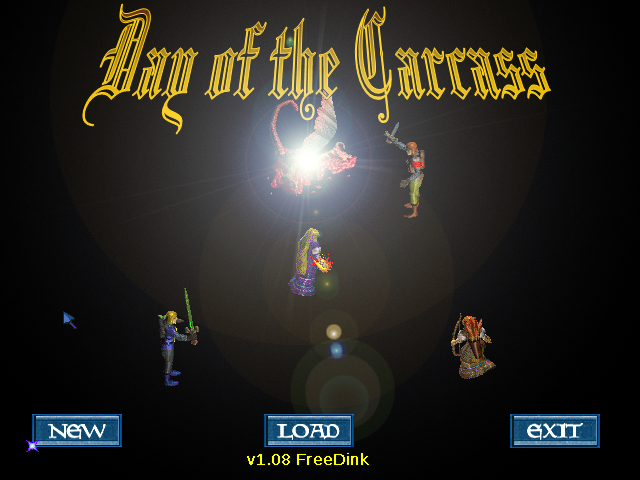 Look, the maiden sprite with a bow *actually* equipped! How cool would that be?

"Day of the Carcass" is seriously impressive as a demonstration of a new style of gameplay. As a game, though, it's awfully frustrating. I wasn't able to finish it, and not for lack of trying.

You play as a team of Dink Smallwood's teenage son and daughter. You directly control his daughter Nadine (maybe Dink admired that poor woman from the original game more than I thought, or maybe this is a coincidence), and his son David is an AI companion whose actions you can influence by pressing a variety of keys. Incidentally, this D-Mod is easily the best portrayal I've seen of Dink as a father. He comes across as a caring dad without losing his trademark rascally spirit. It's fun how the whole family are badass adventurers. Remember, the family that slays together stays together. 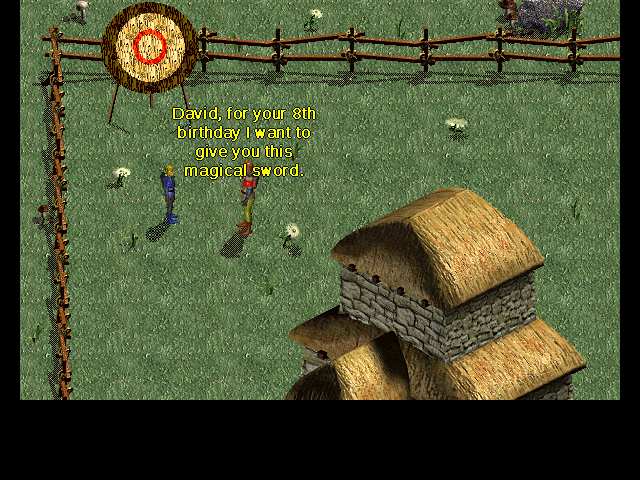 AI companions that attack enemies have appeared in several D-Mods, but David takes the concept to new heights. Rather than just rushing to enemies and attacking, he exhibits the sort of attack-and-retreat strategy used by a typical Dink player. He'll also try to dodge enemy projectiles. I'm really impressed by how well he functions independently, although he will occasionally get hung up on things, and it would be nice if he retreated and said something when he gets near death - as it is, you have to watch his health bar like a hawk. The player has a lot of options for directing David. By pressing certain keys (you have to read the readme to learn what they are - putting them in the game somewhere would have been helpful), you can have him switch to following Nadine, swap between sword and herb boots, change which enemy he's targeting, or use one of his several special attacks. All of these controls definitely take some getting used to, but the D-Mod provides a large, easy area at the start where you can learn the ropes at your leisure. 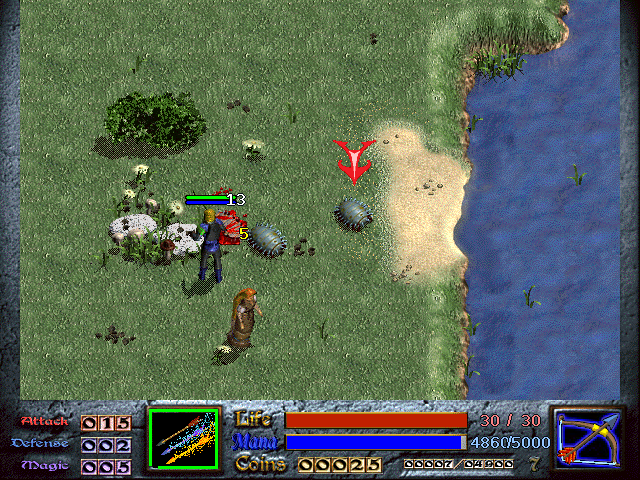 The arrow indicates which enemy David is targeting.

It's also possible to directly control David's movement with certain keys. Pressing a "direction key" causes him to walk in that direction until directed otherwise, which works a little better than the attempt at second-player movement in "Magical Mayhem." "Day of the Carcass" comes very close to being the first bona-fide co-op D-Mod, but there's no button to make David attack. Still, playing around with the direct control made me dizzy with the possibility. Think how awesome it could be, you guys! Two-player Dink! Hell, why not refit the original game? Oh man. I'm hyperventilating here.

Nadine attacks using the "Lyna's Story" style bow. Like David, she has a few special attacks. Both characters require mana to use their specials. David's specials include an attack that absorbs health from enemies and a move that causes him to become immaterial until you press the button again, in case keeping track of both characters is becoming too much to handle in a battle. Nadine has fire and ice arrows and a triple shot. Both characters have a powerful "Ultimate" attack that drains all of their mana. Nadine's specials are powerful, but they use a lot of mana. The mana regenerates very slowly, and there's no way at all to speed it up. Unfortunately, her regular bow shots are seriously underpowered compared to David's fast attacks. Nadine has regular bow lore, a piercing shot and a combination of both effects that trigger at random, but when you don't luck into these effects, her shot does very little to the enemies. In the hectic battles you get into in this D-Mod, you just don't have time to pull the bow back all the way. I mostly ended up relying on David, except when I could use one of Nadine's specials. He can mop up a whole screen of weaker enemies before his sister can fire two shots. When you get to the stronger enemies, this gets to be a problem. 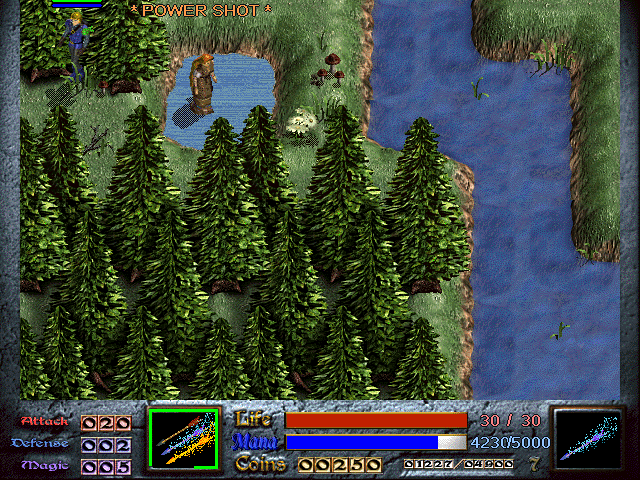 I had a lot of fun playing around in the first segment, just experimenting with all the new gameplay features. As soon as you finish your first task, however, you're plunged into a long and difficult section that makes all the flaws of the new system impossible to ignore. This section has you fighting nasty little spiders that are strong, tough, and leave little webs all over the place that you can get stuck in. Here, you learn very quickly that both David and Nadine are as fragile as twigs, and if either of them dies, your game is over. I died with a frequency that I doubt has been equaled by any other D-Mod except that time I decided to play "Bill & Kill" without cheating. The spiders can kill you in practically no time at all. What's worse, Nadine takes damage from David's attacks, which is apparently not what the author intended. It takes great focus and a quick trigger on using healing potions (for both characters - you can give them to David by pressing the "C" button) to avoid death. At least you can buy the potions any time you're not fighting by calling the potion-seller with the press of yet another key - another handy feature. Still, sometimes it seemed so hopeless that I resorted to making David immaterial and just waiting around to use Nadine's specials to finish off the spiders. I really wish the mana recharged faster. 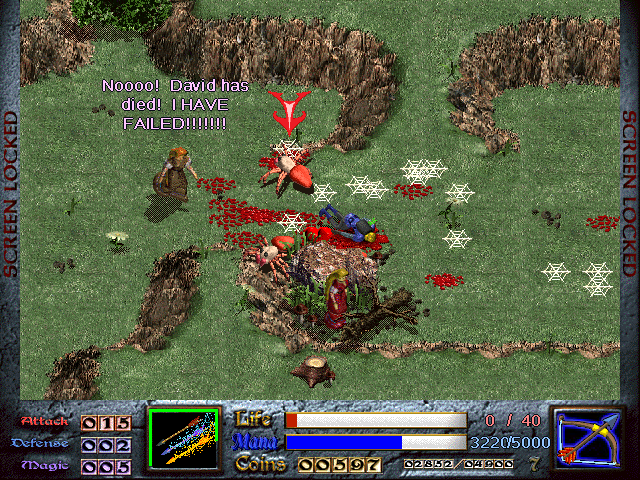 Still, after an alarming number of deaths, I managed to get the hang of fighting the spiders. What did me in was the boss, a fearsome dragon. The dragon only takes significant damage from the siblings' ultimate attacks, which take a ridiculous amount of time to recharge. Meanwhile, he summons smaller fire dragons. If you leave the fire dragons alive for very long (a lot less time than it takes an ultimate move to recharge), the dragons call a curtain of flame down upon the world that is virtually guaranteed to end you. I managed to survive it once, but I sure wouldn't count on doing it reliably. Instead, you're supposed to put out the fire dragons with the ice arrows and kill them before this can happen. The problem is that the bow attacks are so weak that even when I focused on this, I could almost never achieve it. As if this weren't bad enough, the main dragon also uses a spell that just sets Nadine on fire. In order to avoid taking several health bars' worth of damage from this, you have to use a spell called ice shield (assuming you got it - I did, but it's missable, and you can't backtrack), thereby consuming even more mana. You're using all this mana when you need a full mana bar to damage the boss! It's completely crazy. I never got within a country mile of beating this thing. 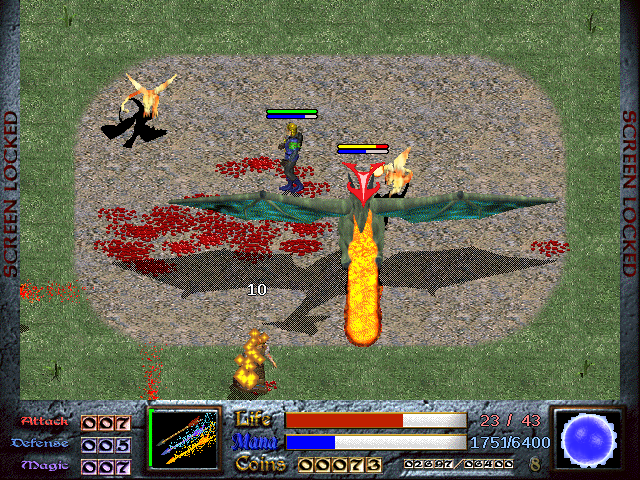 I just noticed that the dragon has a mana bar. He never seemed short on mana when I fought him.

So that was a bummer, but the author mentioned many planned improvements that might have made this one of the best D-Mods ever if it had been finished. I have to praise more than just the ambitious gameplay system. The scripting and writing are also impressive. The cutscenes are well-staged and feature multiple characters moving and acting at once - a challenge in DinkC. There's even an interactive scene where Dink rummages around a basement, moving around and commenting on various things as Dink would do, as you (as Nadine) can look around the same basement yourself. The dialogue all feels natural, and some of it is very funny. I liked the potion-seller, who is terrified of hugs. Dink feels in character, and his family members have fun little personalities. I enjoyed the dynamic between the siblings, who loyally support each other but bicker as siblings do. Both of them have that same sort of strangeness to them that makes Dink so much fun. Further points for the fact that, at long last, "Day of the Carcass" is the first D-Mod to use dnotalk.c to introduce a new set of "talking to nothing" messages. I'm glad that Nadine doesn't just copy the same old things her dear daddy always says when he's talking to nobody, as he frequently does. Oh, that Daddy. Always having just a little too much to drink. 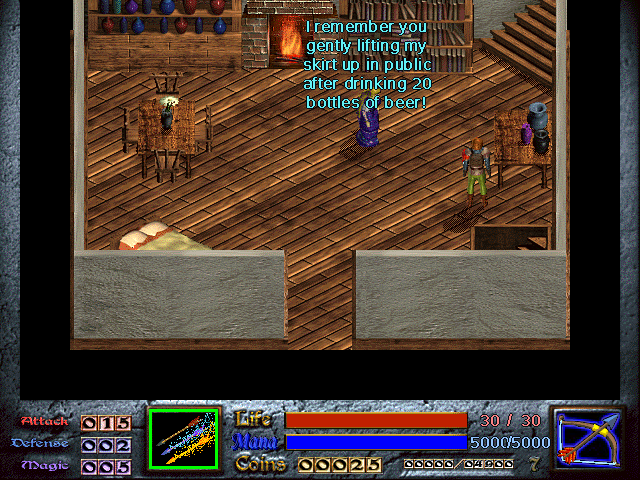 This stuff makes me all warm and fuzzy inside. I would love to play a big long D-Mod about the adventures of the Smallwood family. They remind me of The Incredibles, but with more sex jokes.

Everybody should play this one, if only to see how far it manages to expand the controls of Dink Smallwood. Unfortunately, it's several adjustments away from being as fun as it has the potential to be, and it is just a relatively short demo.