Dink Smallwood is both a game and a game platform. In the game, Dink Smallwood is a character, but in the platform, he's little more than a graphical avatar. A lot of D-Mods use a characterization for Dink that is at least derived from the original, but not nearly all of them. Certainly, Dink doesn't have a consistent history - early on, there was an effort to construct a timeline and treat all the D-Mods as events in a single life's story, but this was obviously impractical and doomed to failure. You can't even count on a D-Mod taking the original game as canon; events from it are ignored surprisingly often.

Dink can be any sort of person, depending on what D-Mod you're playing. Sometimes he's aggressive and cruel; other times, he's polite and compliant. He can be intelligent, slow-witted or a mixture of the two. His attitude toward adventuring has variously been enthusiastic, apathetic and reluctant. Some D-Mods go ahead and tell us that the Dink-resmembling individual we control isn't Dink (example: "The Lumbergh Legacy") or at least, not the Dink from the original game ("Friends Beyond 3"). Still, we can't really ignore the familiarity. The "alternate hero" concept seems to refer to only to D-Mods that use alternate graphics for the hero, after all.

"The Lost Shoes" (I knew that header was up there for a reason) got me thinking about this because Dink is a total non-entity in it. The only way I even know for sure that he's supposed to be Dink is that the D-Mod skeleton "Dink Smallwood in" logo is used on the title screen. Dink acts like a robot programmed with the single task of retrieving some dude's stolen shoes. People tell him to do things, and he says, "ok." He's merely a vector for the quest. To be honest, I guess he usually is anyway. This Dink has just decided to cut out the bulls***. 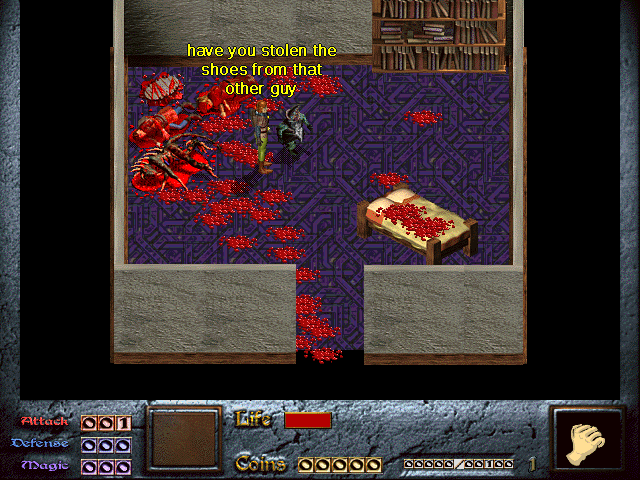 Does Dink care about a pile of freshly-murdered corpses? No. There are lost shoes to find.

This is another sloppy first effort with little to do, laughable hardness, bad spelling and no punctuation, but it's better than the last few D-Mods I played. At least the screens have reasonable borders that look fine. At least things actually work and the scripts check variables. At least there's something to do other than walk across some screens.

Dink's quest for shoes takes him to "bonca-land," where he must help a bonca called "the cute bonca" by killing the pillbugs in the area, including a tougher pillbug that I guess you could call a boss if you really want to stretch the definition of the term. Once he does this, the bonca returns the shoes, but the guy who sent Dink on the quest doesn't want them anymore - he bought a new pair while Dink was gone. Somehow - and characters in D-Mods have done many things with totally inscrutable motivations, but get a load of this one - his response to ending up with an extra pair of shoes is to fight Dink to the death. He doesn't even say anything threatening, he just charges. I'll admit that this put me on my back feet for a second, but this weirdo is no match for Mr. Smallwood. 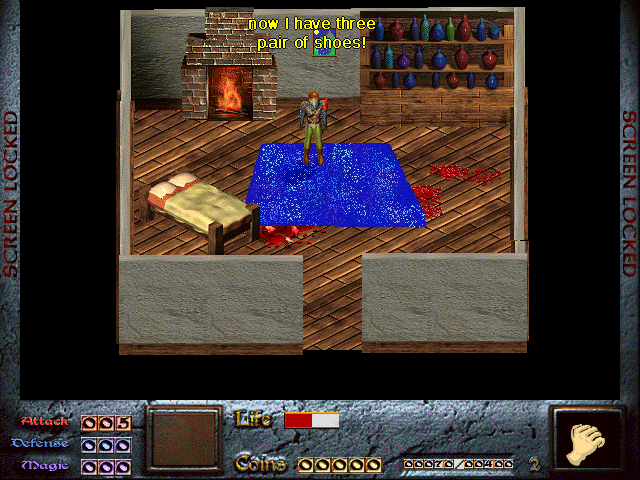 That's it for now. Merry Christmas, everybody.