Please Cindy, say the whole name each time.
290: Chores Author: MadStalker Release Date: May 19, 2009
"I bet you can feed the pigs without my assistance."

In this DMOD, Dink is summoned to the frozen north by his grandmother (she has a name, but I've already forgotten it) to do chores for her. Many DMODs make Dink do chores, but none were as direct about it as "Chores." Of course, at some point an evil wizard shows up and you have to take care of him, but chores still make up a majority of the DMOD. Dink has to gather firewood, fetch water, pick up a package and feed the pigs TWICE. Feeding the pigs is totally uneventful, which bears mention, since this is the first time I've ever seen pig-feeding in a DMOD without Milder or some sort of Milder-analogue showing up to deliver the old "Is pig farming fun?" speech or some variation thereof. I was starting to believe that the act of feeding pigs just spontaneously generated these kinds of people in this universe. I was starting to wonder about the practical applications - could you feed pigs over and over to generate an endless supply of slave labor? But no. 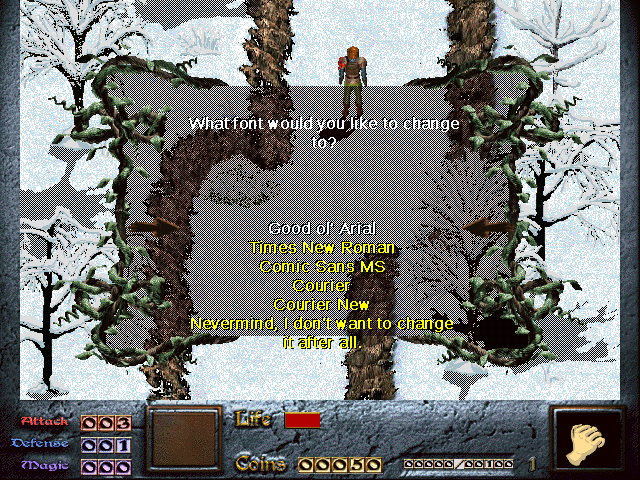 You can select your font in this DMOD, but it didn't work for me. I totally would've taken the rest of my screenshots in Comic Sans, too.

"Chores" is a pretty unassuming DMOD, but it's attracted quite a bit of attention. 8 reviews is a lot for the DN, and they're all pretty positive, even the 7.0 review that says it's "not great." A couple of the reviews say it's a return to the high standards of the past, which screams "I haven't played any but the highest-rated DMODs that came out before 2005," since I don't think the standards had ever been higher than they are at this point. What is it about this mod that appeals to people? Let's see if I can get through this without using the words "solid" or "polished." God, I'm a lousy writer.

"Chores" is a straightforward 20-minute adventure for Dink that, without doing anything great or exciting, does just about everything right and has a few neat little features. It's about context, really. When you've played a lot of DMODs, a game without hardness or depth dot errors, fatal bugs, misspellings or broken grammar, just plain bad dialogue, frustrating enemies or puzzles, invisible walls, an excessively large or empty map or a nonsensical plot can't help but endear itself to you at least a little bit. I mean, all of the things I just mentioned are so common. The biggest problem I ran into here was that the purple bonca bug isn't fixed, and there was a depressingly long stretch where zero mods had fixed that. It's also a thorough DMOD, with a script for just about every sprite on the indoor screens. 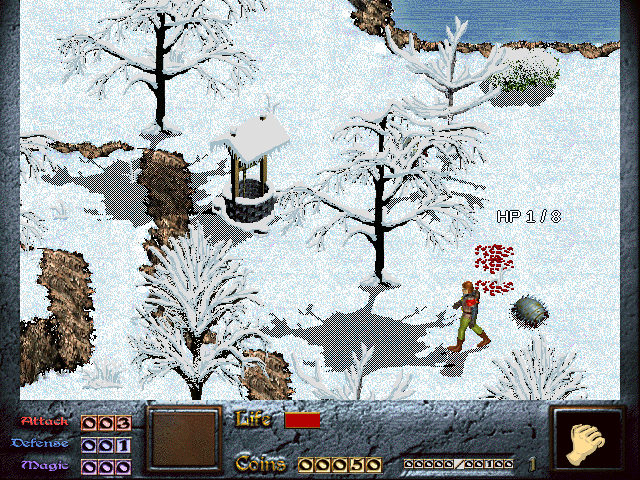 Most of the enemies in this one will tell you how many HP they have left when you hit them. Gee, that's nice of them!

There's something charming about being asked to do chores without it being a launching point for some kind of sinister plot for once. Dink's grandma isn't secretly evil or fighting evil, she just wants her grandson to help her with chores. I almost wish the totally-unrelated evil wizard of the week didn't show up, but that segment is pretty straightforward too and provides the game with some pretty satisfying action, so I've really got no complaints.

I did get stuck for a little while gathering the firewood. I found five of the six branches you need immediately, but spent several minutes searching for the last one. It wasn't hidden in an unreasonable place or anything, this sort of thing just happens sometimes.

This is probably the last appearance of Ronan and Billy, who make their final stand against Dink in a cameo role. Killing them is very funny, with Ronan going into histrionics. 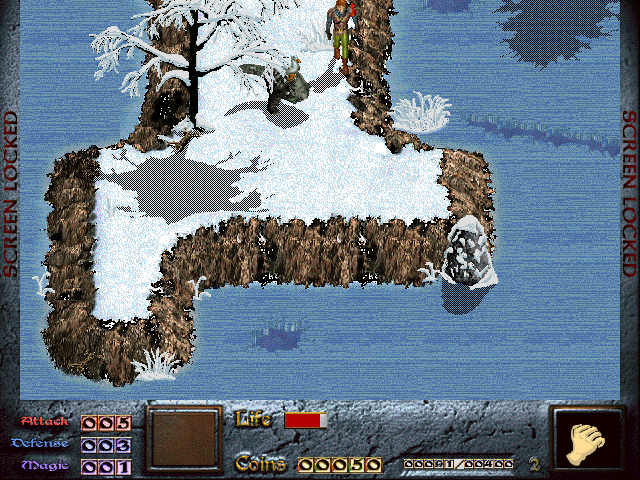 The really funny part is that the "duck riding a bonca" sprite here is better (no jitter) than the one from "Revenge of the Ducks."

When I beat the game, I was surprised to have somebody who looks like Seth come and admonish me for not ever hitting the pigs. If you do, you get an ending where pigs get together and ambush Dink, but I prefer the ending I got. No animal revenge can compare to the experience of being chastened for a lack of animal abuse.

291: An Aeophian Adventure: Dink Goes to Aeophia Author: Patrunjelu Release Date: May 21, 2009
"I was looking for a relaxing adventure. I'm sure that there's nothing relaxing here."

This is an odd one. There are pieces of a game here, but nobody bothered to build a game around them.

Dink receieved a letter from a woman asking for help and thought it would make for a "relaxing adventure," so he travels to the town of Woodshire. We know this because Dink tells the player directly just after arriving there. I'm not sure where this "Aeophia" comes from, since Woodshire is the only place name ever mentioned.

There's no win condition in "Aeophia." Whenever you want to leave, you can leave, resulting in the quote in the header and nothing else. There are a few little quests you can do, but they won't lead you to an ending or even change what Dink says when you decide to leave. I suppose the main quest is helping the woman who sent Dink the letter; it's the only one that involves any combat. It isn't very satisfying, though. A girl has been kidnapped. You can find her kidnapper, but she's already dead. You can't even bring her kidnapper to justice; the best you can do is escape. I'm not saying that the player character has to succeed in all their quests, but it would be nice if the failure at least contributed to some sort of plot. You achieve nothing, and nothing comes of it. 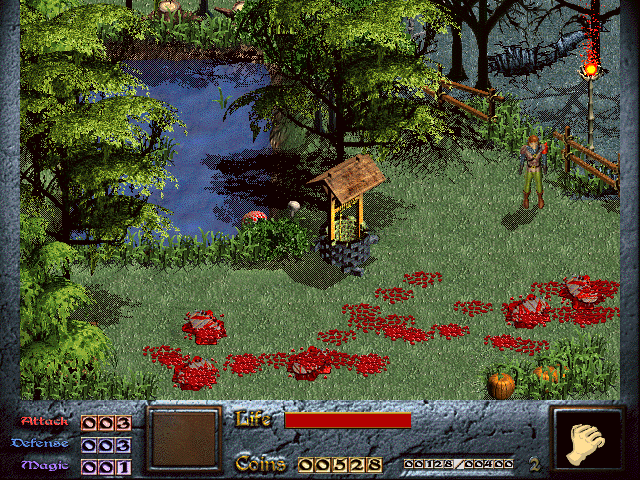 I like the look of this screen; it's impressive how the transition between the grass and darklands looks like a smooth diagonal line. Too bad all sides are invisible walls. You have to examine the torch to move on here.

Another little quest involves getting some money from a guy. The merchant was supposed to sell him two bottles of some special kind of booze, but he only has one of them. How, exactly, is this supposed to be Dink's problem? Hell, the guy may be a grouch, but he's in the right. At least there's some humor in the solution: you get him drunk, and a combination of double vision and drunken stupidity convinces him that you've brought both bottles. Dink gets a reward for this one, but it's just some gold, and you've got no place to spend it... not to mention that every time this DMOD was supposed to give me gold, I had my gold total go down for some reason.

The other thing you can do is run the town pub. This involves going around town to see what kind of beer everybody wants, serving that beer, and earning some gold for the day, but again, there's nothing to spend it on. It's totally pointless.

The map is also pretty bad. Hardness holes are everywhere. Absolutely no screenmatching has been done, so trees and fences disappear when you cross the screen barrier. "Invisible wall" screen edges abound. The title screen is the default "your title here" from Mike Snyder's DMOD skeleton. This isn't helping a DMOD that already suffers from a lack of a proper game structure.

There was some potential here. The quests would serve pretty well as part of a larger game with more things to do, and some of the dialogue is actually pretty good. Unfortunately, "Aeophia" just isn't much of a game. I'd advise staying away from this one.

Here is where I had something called GoldSeeker, because i was misled into believing it was a DMOD by the fact that it's in the DMOD section. It is not a DMOD. It's a game made in Java with some Dink Smallwood graphics. I ain't playing it. "All the DMODs" does not include things that are not DMODs. We're down to 17 DMODs in 2009.