Reply to Re: Crazy Old Tim Plays all the DMODs of 2005

The description of this DMOD lays out the entire plot for you. "A bunch of stupid penguins are pooping all over the place. Kill them before the stench kills us!"

This is indeed a serious problem. Penguin poop smells as if it has issued forth from the devil's own anus, and brother, do they make a lot of it. Once, I made the mistake of going on a short boat ride off the southern coast of Peru to some nearby rocks covered in penguins. The stench was so foul that it overwhelmed my sinuses and I became very ill. I ruined the ride for everybody with my constant moaning. With this experience in mind, I couldn't judge the people in this DMOD who beg Dink to slaughter the penguins too harshly. 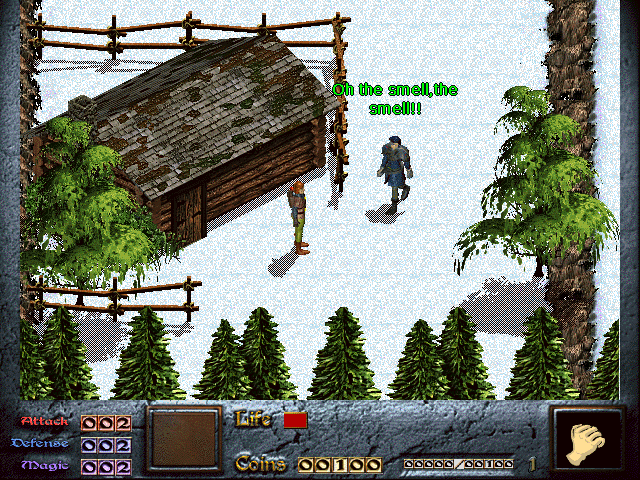 I know that feeling, man.

Even compared to some of Carrie's other mods, this one feels pretty small. All you have to do is raise enough money to buy the fireball spell and then go kill the penguins. The money-raising is done partially by procuring certain objects for a few people. Dink obtains these objects by stealing them from other people in the same small town. Nobody complains, although there is one guy who complains that everybody in the town is always stealing things, which is a clever self-aware touch. 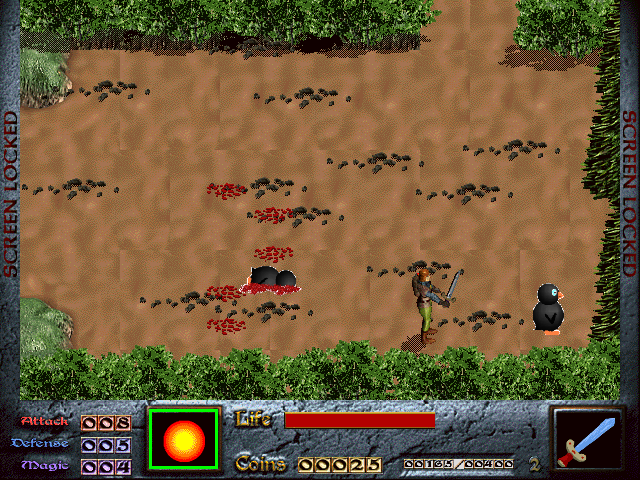 Carrie's amusing derpy-lookin' beavers are back, and the penguins themselves are indeed hilariously stupid-looking. Unfortunately, they're also given a stupid brain 10 (like the dragon, but without magic), which means they don't target Dink, so they can't really fight back. This is a DMOD where you kill helpless penguins. Oh well, that's what they get for pooping all over the place.

Of course, there might have been a more peaceful solution. Those townsfolk may have been able to find somebody who would pay them for the privilege of hauling away the poop. That penguin guano is actually extremely valuable, as I heard the tour guide telling us in between my bouts of retching.

In the tradition of Ed the SCV, here's another mod with StarCraft graphics.

This DMOD has something unique - a graphic replacement pack made specifically for it by somebody else. On January 17, 2008, "Jakewedding" released Zach the Marine Extras, which replaces some of the DMOD's regular Dink graphics with more StarCraft graphics and some MS Paint originals. The add-on replaces the inventory graphics and provides a title screen ("Zach the Marine" originally just used the placeholder title from Mike Snyder's DMOD Skeleton). It's packaged quite poorly, though. Rather than including a GRAPHICS folder you can just copy onto the existing one, it contains a few different folders, and you have to figure out for yourself which files to copy to what locations. 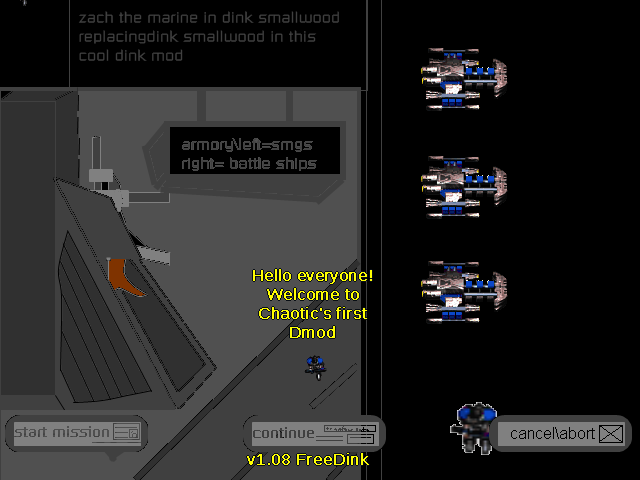 This is the new title screen added by the Extras pack. It renders nonsensical a gag where the main character complains about the lack of a new title screen, but it's still nice to have one. 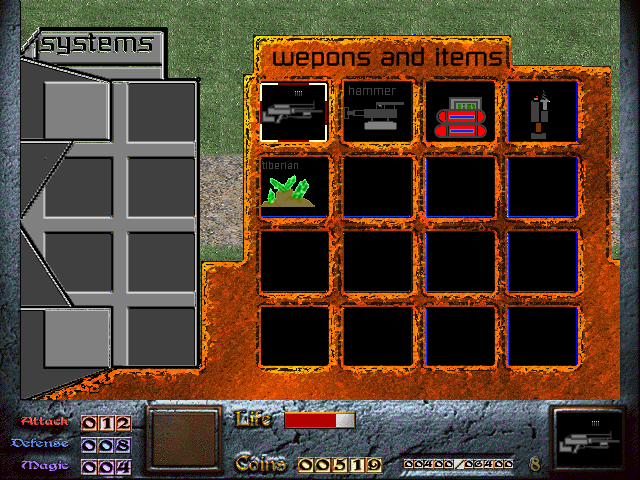 The new inventory screen is the biggest change made by the Extras pack. It's unusual in that it doesn't take up the entire screen. Oddly, the status bar is unchanged by the pack.

In this adventure, Zach discovers that his bomb "the EXPlotion" has been stolen by a king. The player takes revenge by going on a murder spree, but first you have to find a small assortment of odd materials to fix Zach's battle cruiser.

It's actually quite a simple little DMOD that I finished in under fifteen minutes. There's not much to the maps, and the combat presents no challenge. You never have to fight any enemies except for several bosses, and those are easy as Hell because you get a ranged weapon that can fire rapidly and they don't. 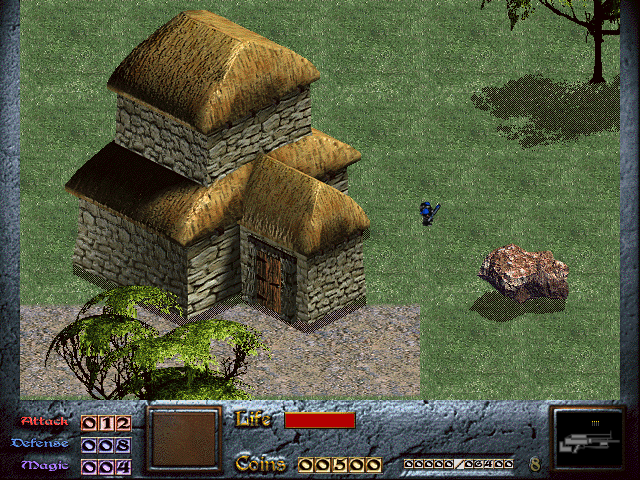 Despite the new main character who suggests a very different setting, "Zach" takes place in a kind of bland standard Dink map.

The plot makes little sense and devolves into a series of barely-connected events, but that's fine. Actually, the DMOD charmed me a little bit with an endearing sort of silliness. It's odd - I didn't find its attempts at humor funny, really, but I approved of them nonetheless. I particularly enjoyed a scene where Zach gets caught, tried and convicted for his crimes, and then left to rot in a prison cell with some other prisoners. There's a cutscene of Zach in jail that lasts for a couple of minutes, and the characters begin to argue about whether or not the DMOD is too boring. 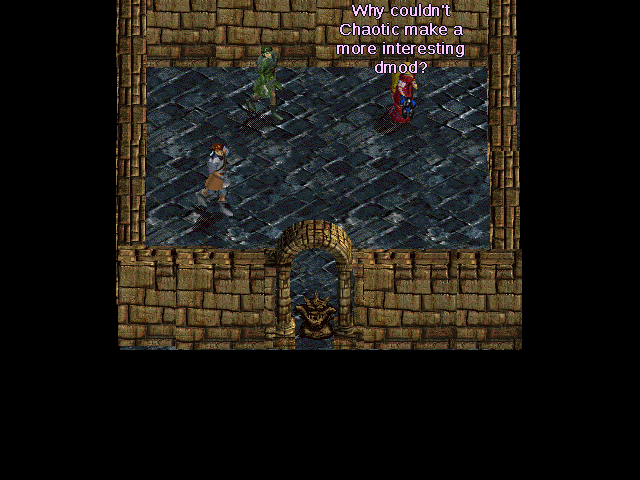 Ironically, I found this scene to be the most interesting thing about the DMOD.

There's something I really dig about a cutscene which takes control away from the player for a long time and, rather than use the time to advance the plot, just makes them watch their character hang around in jail. Actually, I was hoping it was going to go on a lot longer. The audacity of that kind of scene in a video game always makes me smile. A video game that has caught your attention can leverage that to make you do certain things that don't meet your expectations of a fun time. Making a player sit around to watch a bunch of exposition just comes across as lazy, but to sit the player down and say, "Here, you've gotten trapped in this cell. Sit and stew in it for a while" - that sort of thing appeals to me. But then, I'm kind of a strange person. I like fetch quests. "They're not fun," people tell me, and I don't exactly disagree. But I like them anyway, especially if they feel like they've been put in deliberately and not as a desperate attempt at padding. 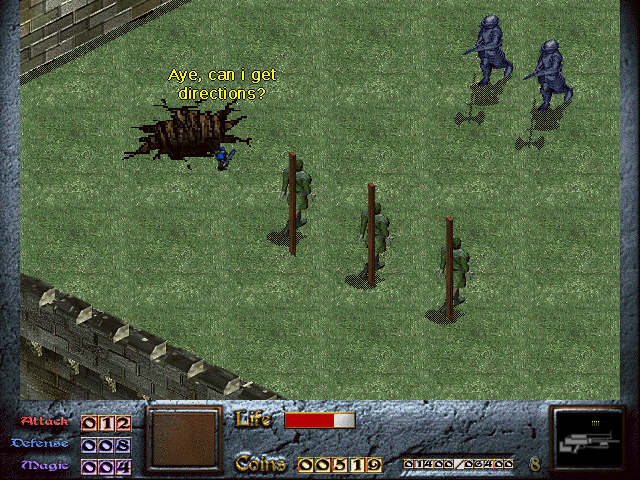 I really like this scene of prisoners lined up for execution. It manages to look very much like they're tied to those posts even though nothing of the sort is shown. My mind can't help but imagine the ropes.

I almost forgot to mention the odd intro in which Zach listens to his answering machine. It's supposed to play three long clips of a song that sets a typical outgoing message to the tune of the Mentos ad jingle, but it doesn't work. Instead, there are three long, uncomfortable silences.

The ending sets up a sequel, but it also weaves a legend of the author's formidable laziness, so it shouldn't surprise anybody that it never materialized. The only thing that surprises me is the existence of that weird little graphics pack. I mean, why this DMOD? It's not bad, but it's not anything special either. In terms of silly romps about a tiny hero from an RTS by Blizzard, I'll take the "A Knight's Tale" series over this any day.