Reply to Re: Crazy Old Tim Plays all the DMODs of 2002

"Ah, so I can fight but STILL be in the Christmas spirit?"

Here I go playing a game about Christmas in July. This is the third holiday-themed DMOD, after redink1's charming Halloween minigame and that Thanksgiving thing.

You know, there's something slightly unsettling about consuming Christmas-themed media at other times of the year. Looking at all those elves and all of that ho ho ho-ing, I feel as if I've stepped into a strange and slightly disturbing world that is unfamiliar to me. It's like I've accidentally taken a step sideways along an axis I didn't even notice existed - a step outside routine perception. From my new vantage point I can see that the shape of things is weirder and more askew than I'd reckoned. During the "holiday season," of course, I hardly blink at this stuff, except for the songs. I hate Christmas songs. There are exceptions, of course, just like Dink occasionally meets wizards who aren't either jerks or villains.

Anyway, it's an odd, liminal feeling, and this feeling is unique to Christmas. Other holidays don't elicit this reaction out of me at all. Halloween, for example, is timeless. Spooky stuff? Candy? Costumes? All things that I can easily get behind at any date. Christmas, on the other hand, has so come to dominate its (ever-expanding) portion of the year that it's now self-defined. Christmas's main point has become Christmas, and if you displace it, it stops making sense.

You're probably rolling your eyes at me. It doesn't freak me out nearly as much as I made it sound, anyway. It's just a little feeling that doesn't quite go away. It's a little block in the middle of my consciousness going, "Hey, wait a second..."

This DMOD I clearly haven't played yet is also the first by repeat author Binirit, who went on to make some well-received mods. She also has a document on the site called "The Rudiments of Scripting," which is a lovely place to start for people approaching DinkC as total beginners.

Now that we've reached the point in the writeup at which I've actually played the DMOD, I can say that despite the odd Christmas-in-July feeling, I found this short romp kind of charming. There's not much to actually do in this game, but I got a kick out of how relentlessly cheery it was. 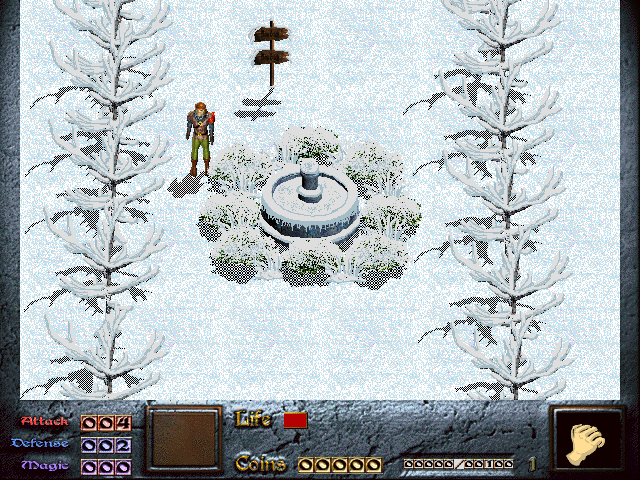 The usual graphics have received a fluffy coat of snow.

"Cheery" isn't strong enough. "Manic" gets closer. Most of the sentences spoken in this DMOD end in exclamation points. Here's a little sample for you.

Even when discussing misfortune, the characters act as if so much sunshine were pouring out of their asses, you'd get skin cancer if you stood within 50 yards of them. It is a proper hoot. I laughed - not hard, but a lot. The only thing I've ever read that's comparable are the little hypothetical dialogues that humorist Dave Barry sometimes writes into his articles. The whole DMOD is like that. It's like that even more than I'm letting on. If you punch anybody in this DMOD, they exclaim, "It's still a merry Christmas!" 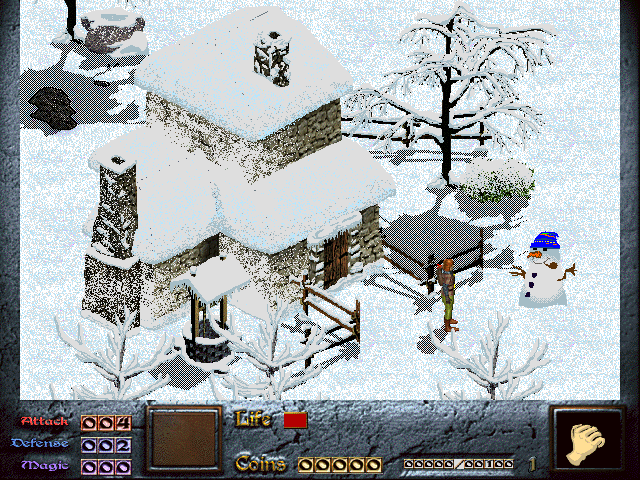 What do you think, Mr. or Ms. non-gendered Snowperson? Isn't it just the gosh-darn merriest Christmas ever?

As you've probably gathered already, the plot here is that the presents belonging to Dink and his Mom (this must be set before the original game) have been stolen. The culprit, Evil Santa, does not appear in this DMOD, and it's just as well. Much like the devil antagonist of the movie Santa Claus, this thieving anti-saint was not competent enough to get far, and the presents can all be found in the immediate area. To find them, you'll have to go around and talk to people, greeting them "Merry Christmas!" although you're also given the option to wish them "Happy Holidays!" One of the presents requires you to fight an "ice bonca," which is just a recolored standard bonca. To make it easier, you can get a bow whose arrows all have snowballs on the end. How seasonal! It practically never snows where I live (and when it does, it's water when it hits the ground), so the white stuff is almost on the same level as elves and flying reindeer for me as the trappings of Christmas fantasy. It's something that you see on cereal boxes, in comic strips and cartoons, in commercials, and everywhere else that time of year except on the ground.

Like I said, there's not a lot to the gameplay in "Dink's Christmas." Everything that happens is arbitrarily triggered by other, unrelated things, so the only way to win is to go around in circles, repeatedly talking to the same people. I also found a hardness bug or two. The Christmas MIDIs get a tad grating after a few minutes, and the whole thing probably would have felt better in the context of the proper season. Still, the mood - the sheer over-the-top zeal - was amusing. Furthermore, it was clever enough that it felt intentional. Here, have some more.

Cleo: There's a cave to the north!
Dink: A cave? I never saw a cave!
Cleo: Well, Christmas is a time of wonders!
Dink: That's true! I'm on my way!

Tee hee. Of course, I could also see how you might find this annoying as Hell. In a different mood, I might've. 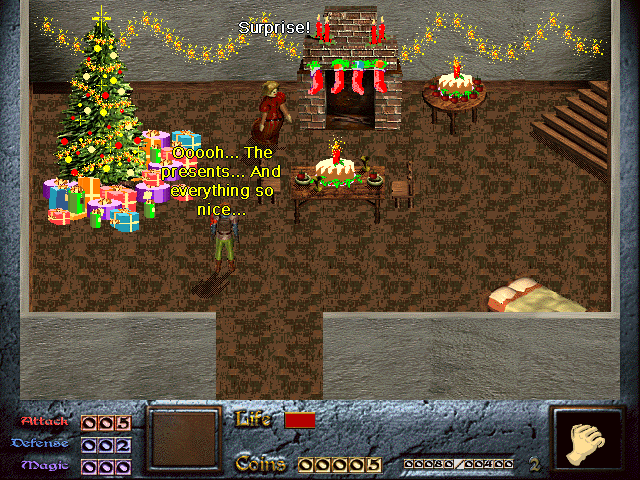 "Because of YOU children will cry."

Yes, two DMODs about Christmas were released on the same day. There's a third Christmas DMOD that came out in 2007, and to add to the coincidence, all three mods are by female authors. I present these coincidences without comment.

"Christmas Adventure" is another mod where you progress by talking to people; in fact, this is all you can do, for you are not Dink, but an inexplicably giant MS Paint gnome. Forget an attack animation; all you've even got for a walk animation are little foot-stubs that vibrate a bit. At any rate, the only item you have is a present. Using it produces the text, "There are no children here!" even when there are. 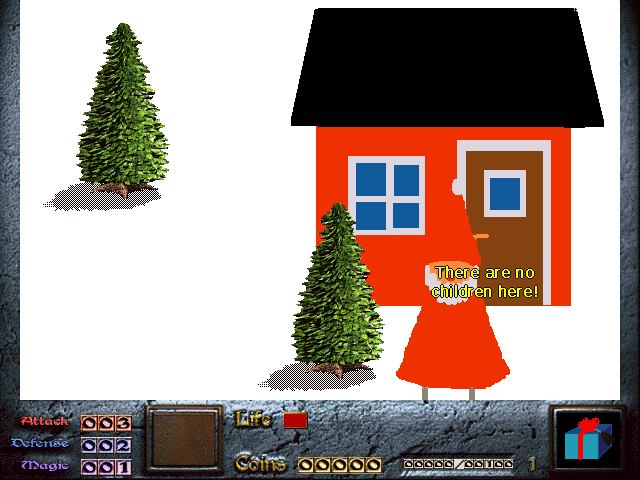 The engine likes to put the text in the middle of your face, which sucks.

The graphics are usable, but they're definitely not very good. I did find the mooing reindeer kind of cute. More bothersome is the plain white background. I know the area is supposed to be snowy, but the original game DID come with some snow tiles. 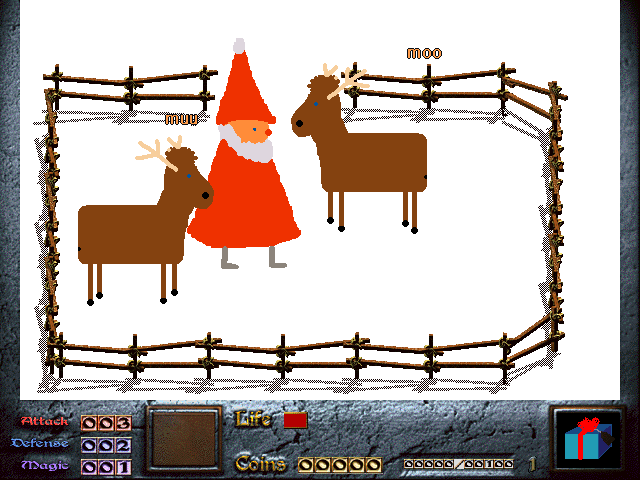 The fact that there are never any visible walls to tell you where you can't go makes this very short DMOD a lot more frustrating than it otherwise would have been. I forgot where the boundaries were over and over, even though the actual shape of the tiny map is qutie simple.

Your objective is to retrieve a magical beard elixir to restore Santa's beard after he accidentally got it cut off. To accomplish this, you must give your love - not even just your body, your undying love - to a character who is billed as the "evil witch," and certainly acts like it if you refuse. Is Christmas really that important? Here we see yet another example of Sharp's twisted sense of humor. Although this mod is very short and doesn't contain much dialogue, there are nonetheless two separate bad endings, each of which blames you, the player, for ruining Christmas without an ounce of mercy. Harsh. I got both bad endings before the good one. In my shame, I must retire to become the gnome in one of those banner ads from several years ago. I may have ruined Christmas, but at least I can help people save money and/or win nonexistent prizes. 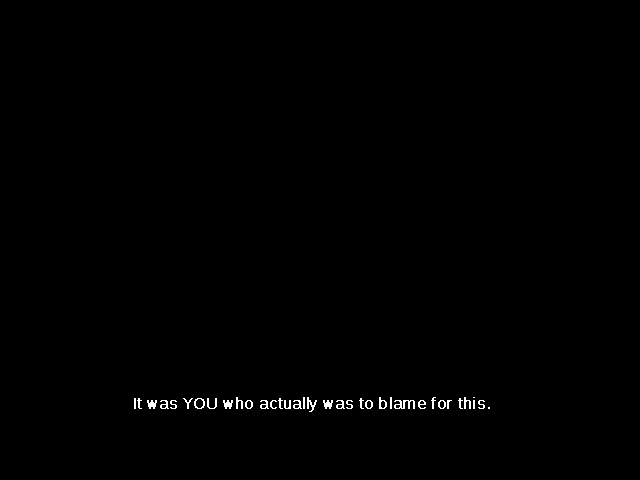 Print this out and pin it on the wall of your home or workplace.