Please Cindy, say the whole name each time.
296: The Savebot Massacre Authors: Sparrowhawk, Pillbug Release Date: September 6, 2009
"No more will we flash and flash and flash for your amusement."

This DMOD is recommended in Dink Smallwood HD.

Apparently Pillbug had this idea in an IRC chat (#Dinksmallwood, perhaps) and Sparrowhawk found it so amusing that he decided to whip up a quick DMOD. 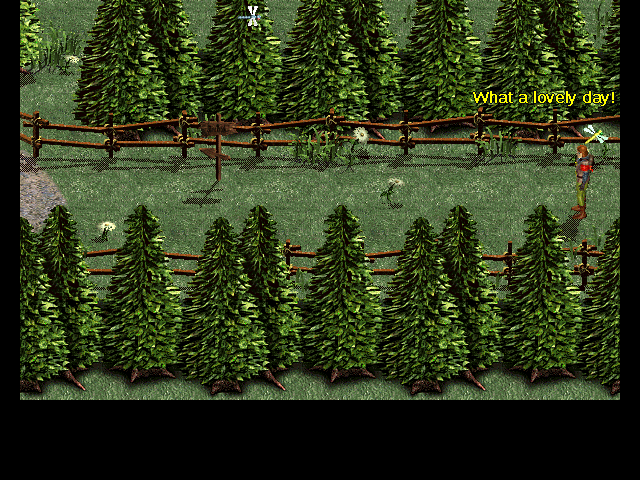 Poor, innocent Dink... he has no idea of the horror that's about to come to pass.

"The Savebot Massacre" is a very short movie in the style of a teaser trailer for a film, complete with the phrase, "coming this spring, to a cinema near you!" Dink happens upon a scene of destruction, and we learn that the savebots have risen up against humanity. 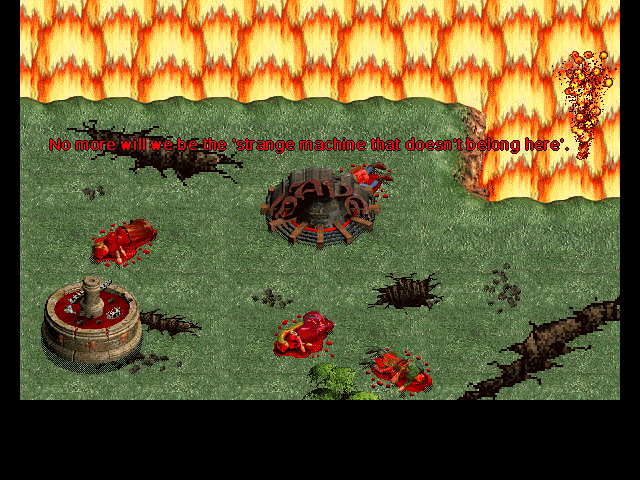 Who will save us now? 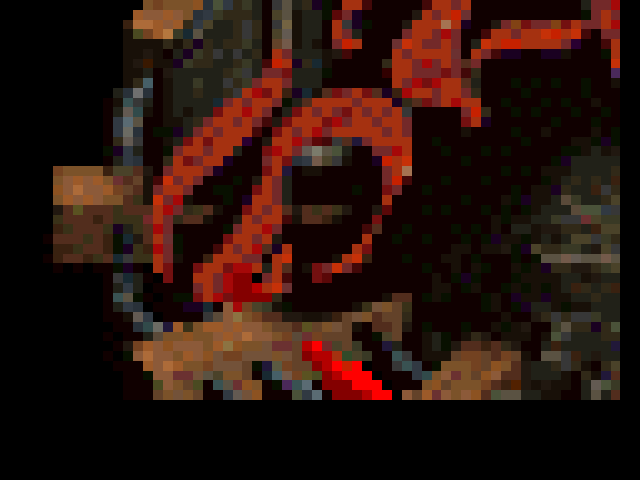 This wasn't intended to be a trailer for an actual DMOD, just a quick joke. It's pretty well-executed. Dink will never look at those strange little machines in quite the same way again...

This is the first DMOD by Linus, aka Iplaydink. He has six to date, which is quite a few for somebody starting this late. Linus has made several nifty graphics packs, some of which I used in my DMOD "Malachi the Jerk."

In "The Bomb," Dink is on vacation in a place called "The End of the World," where you can stare off into an endless abyss. Dink is less than impressed by the sight. 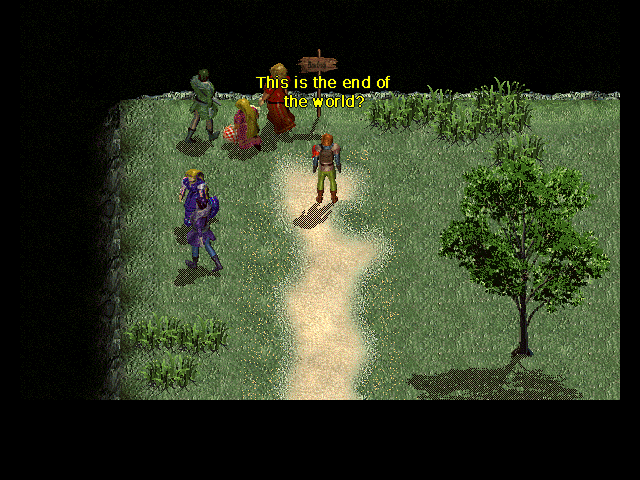 No, that's a different DMOD. Fortunately for you, this one is much better.

In the towns near the End, fish are so rare that one fish is worth 1000 gold coins. There are traders where you can sell fish you find for that price. 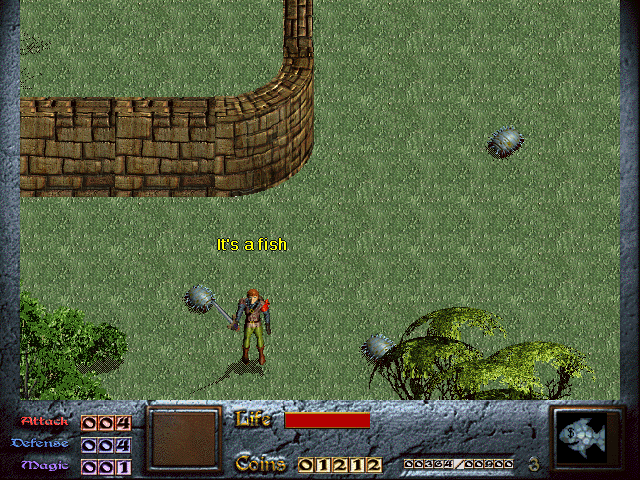 Look, it even has a little dollar sign for an eye.

Under the town at the End of the World, there's a network of poorly-tiled caves. There, Dink discovers that the town is threatened by a mysterious, unknown rectangular object. 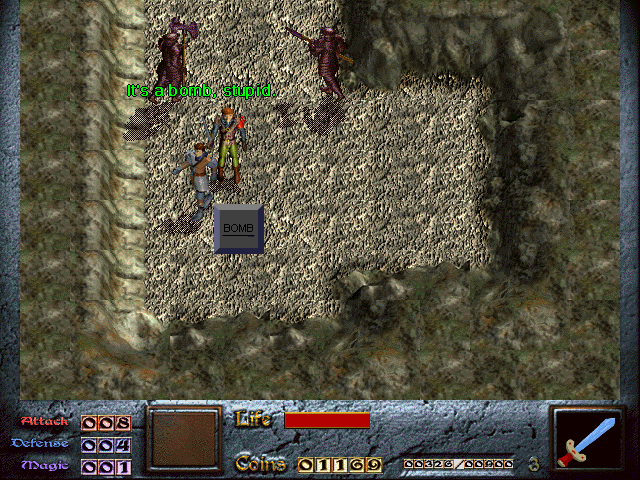 Yes, one of those.

It turns out the bomb was set by the "Order of Bombs," who demand a large amount of fish under threat of explosion. You have to go to the "Cathedral of Bombs" and defeat the Order. Man, these guys really like bombs. It's a silly, thin little story, but I enjoyed this DMOD anyway for its fun personality. This DMOD doesn't take itself too seriously. For example, when Dink finally learns how to disarm the bomb, it turns out that all you have to do is press a large button marked "OFF."

There are some problems with the map. As I mentioned, the caves are quite poorly-tiled. Most areas have sprites defining the edges rather than tiles, and as a result, there are quite a few hardness holes, especially once you get the fireball spell and can burn down those trees that ring the screens. It's possible to get into places you aren't supposed to go. There are also depth dot errors, mostly toward the beginning of the DMOD. 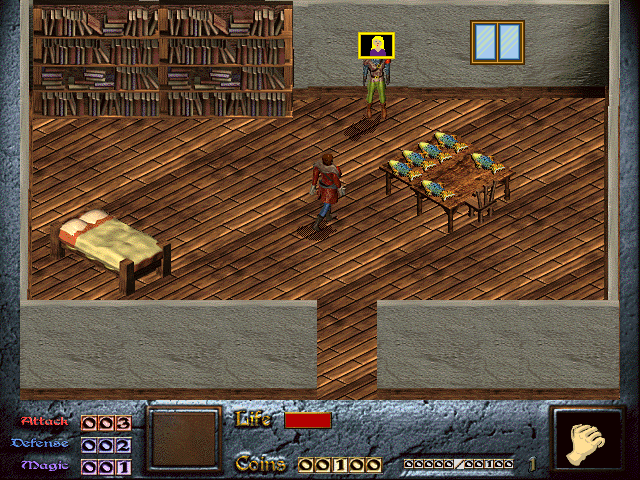 Either this is a depth dot error, or Dink has just had an extreme makeover.

You start with an item called the Quest Log, which you can use to have Dink recite everything that's happened so far and talk about his current situation. This isn't a dry summary - for example, one event is stated as "I found a cave and lied to some weirdo." There's also a healing spell that has a new little animation of a cross when you use it. 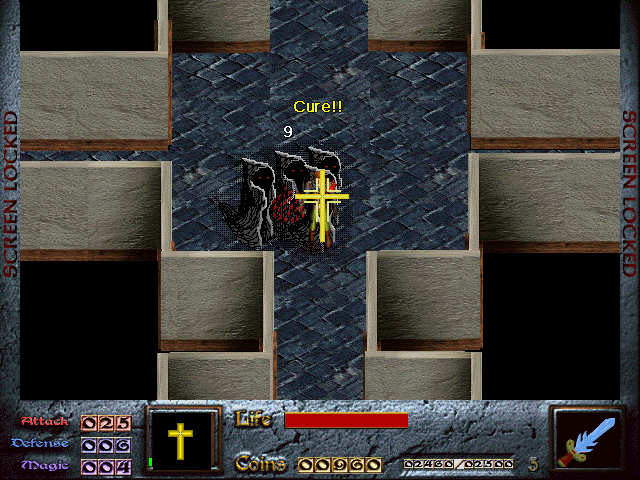 Get back, demons! Back!

Finding secrets is fun in this DMOD. Iplaydink seems to be fond of making little arrows on the map that point to them, although the arrows might not be immediately obvious. Some of them are even literal arrows, such as you would fire from a bow. Boy, it's been a while since I played a DMOD that had the bow, come to think of it. I'm pretty sure the last one was "Dink Goes Hunting" from 2006, and that had weird bows that you couldn't draw back. The last one with a proper bow might even have been in 2005. But I digress. I also liked the MIDI selection. The songs have a lot of energy and set an enthusiastic mood.

For a simple DMOD by a first-time author, I thought "The Bomb" was pretty fun, and it had enough unique ideas to seem fresh. You have to be willing to put up with slightly dodgy maps, though.

"The Quest for Not Quite as Lame" has the most meta DMOD concept yet. It's about Pillbug trying to make a DMOD that's less lame than "Happy Sunshine Land." Well, he succeeded. In addition to being a real DMOD with actual gameplay (already, we've passed the "not as lame as Happy Sunshine Land" test), "Not Quite as Lame" is the funniest DMOD I've played in a while. DMOD authors frequently try to be funny, and it's pretty common for them to get some chuckles or at least a smile out of me. Still, a lot of attempts at humor fall flat, overrelying on the same old fourth-wall jokes without giving them a new spin or worse, throwing out a bunch of swearing and sexual references in a non-clever way. "Not Quite as Lame" consistently throws out quips that have an intelligent humor behind them - not in the sense of "highbrow," but you do get the sense that somebody's brain was working when they wrote these lines. And then there are moments of lovely silliness, like the "rofl well."

The rofl well demands laughter. To appease it, you must collect laughter from inanimate objects: the rofl shroom, the rofl rock and the rofl bush. Fortunately, Dink need not be a comedian to extract these guffaws; no, laughter is these objects' very reason for being. All they need is an attentive audience, and they'll do what they were born to do. 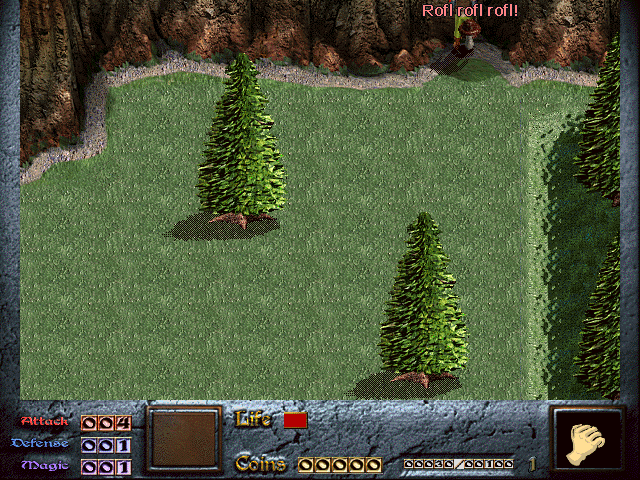 They even "roll" by flipping through a set of similar frames.

This is another DMOD where Dink opposes the author, as in "Escape." This time, Dink has received a message from the Dink Network asking him to put a stop to Pillbug's creation of bad files. In what has been quite a trend recently, some Dinkers make appearances, including Metatarasal, Magicman, Tal and a cameo by DinkKiller. 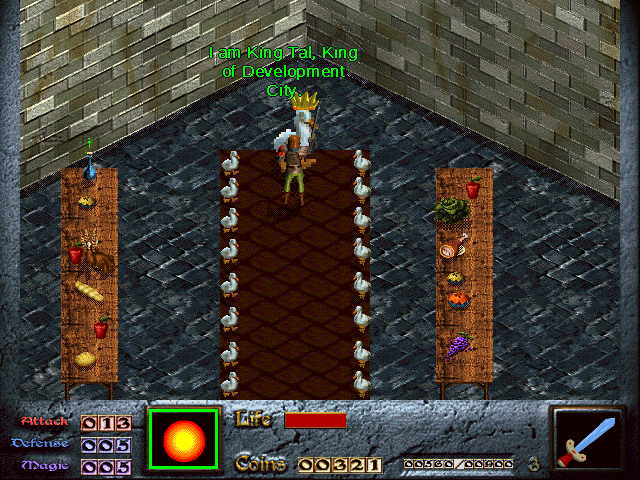 Dink: So...what do you do?
Tal: Mostly sit around looking important. Got a problem with that?

Much of the quest deals with finding a way to fight the author. Dink gains an ability to gaze into an object's script by looking at it (this ends up being almost useless) and acquires a sword called "Scripted Steel" that can destroy objects with scripts attached to them that are "being used for evil." Yeah, some of these jokes will probably only be appreciated by DMOD authors. I got a kick out of them. 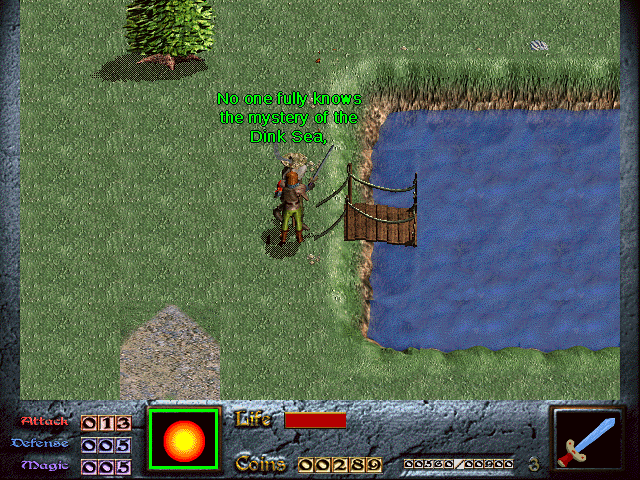 If I didn't know better, I'd say this was a reference to something.

I've noticed several trendy elements in DMODs lately. This is the third DMOD in 2009 to contain a library with books you can read including, in all three cases, a book with information about each of the monster types in Dink's world (this DMOD does have the largest of the libraries in terms of the amount of text you can read). It's also the fourth recent DMOD to contain a healing spell, this time represented by crossed Band-Aids. 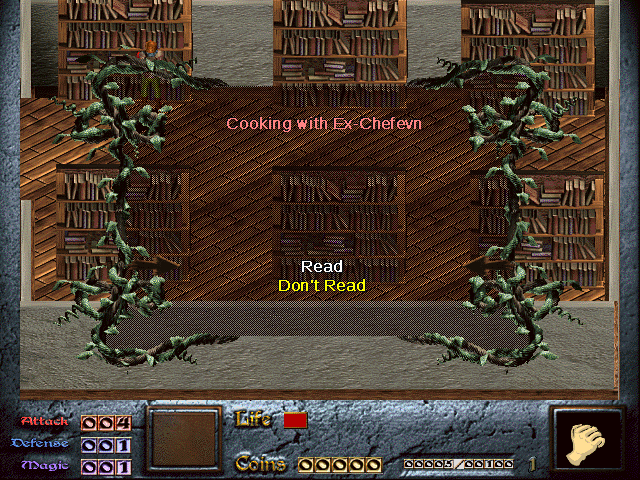 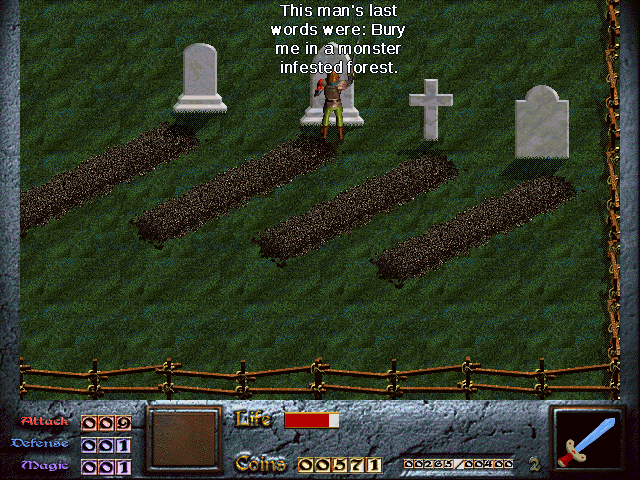 This is my favorite headstone joke yet.

There's a Dink trivia game at a certain point in the DMOD. You get a reward based upon the number of questions you answer correctly. If you get them all right, you get a banana weapon. 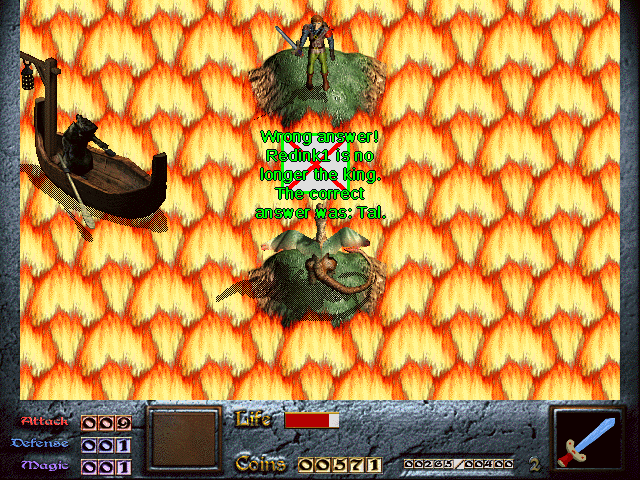 I maintain that I answered this question correctly. 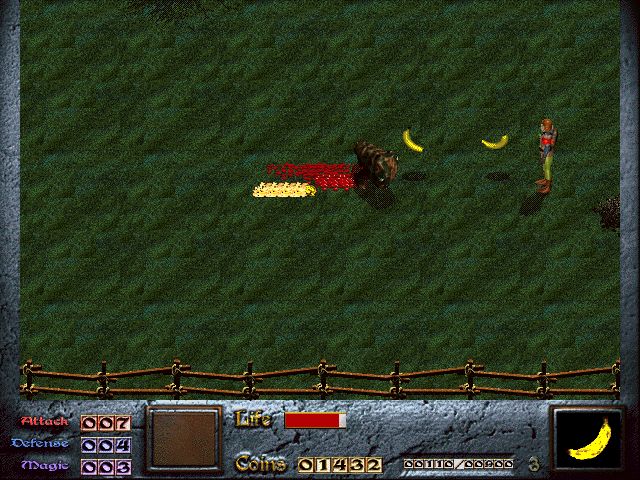 The banana weapon isn't very useful here, but hey, at least it finally made it into a DMOD!

There's a quick visit to Happy Sunshine Land at one point. Pillbug did the "have Dink mock your early, terrible DMOD" thing long before I did it with Dink Forever In "Malachi the Jerk." 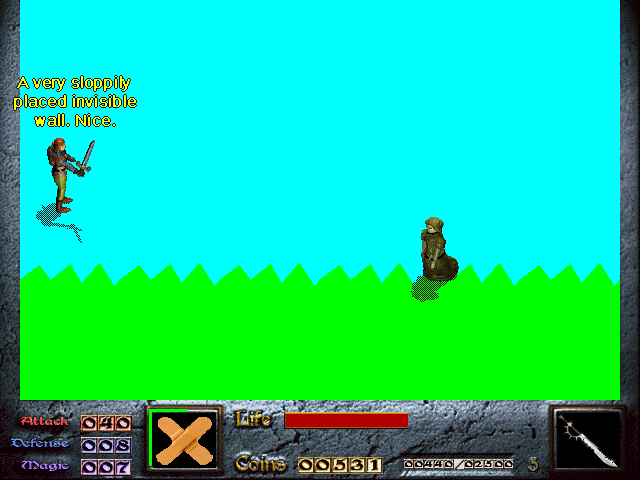 Pillbug is a pretty tough little bug in the final boss fight, which was a bit surprising since the game had been a cinch up to that point. Still, I was able to win on the first try with the help of the healing spell.

I've had nothing but praise for this DMOD so far, but I should talk about the map. It's bad. The first area is okay, but everything after that is a series of big, mostly empty boxes. A lot of screens have just one object dead in the center, adrift in an uncaring sea of background tiles. A handful of screens have nothing on them at all except some kind of boundary. I'm not super picky about maps, but it did detract from the experience. 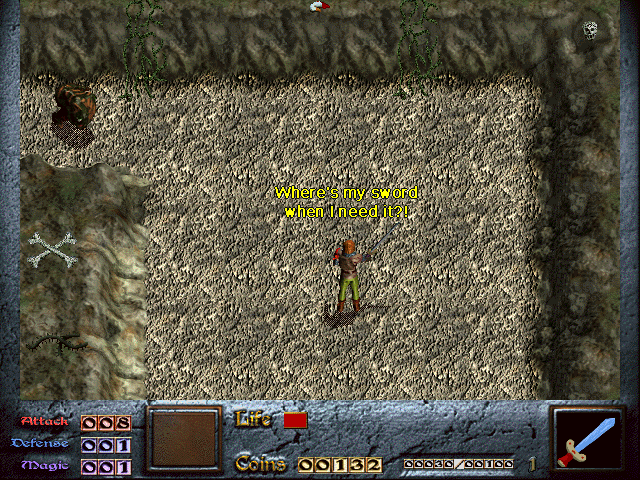 Tip for DMOD authors: when writing a cutscene, think about what the player might possibly have done by that point. Just a nit pick, but you have to admit this looks silly.

After playing this one, I'm looking forward to "Happy Sunshine Land 2" if that ever happens. I hope it does.